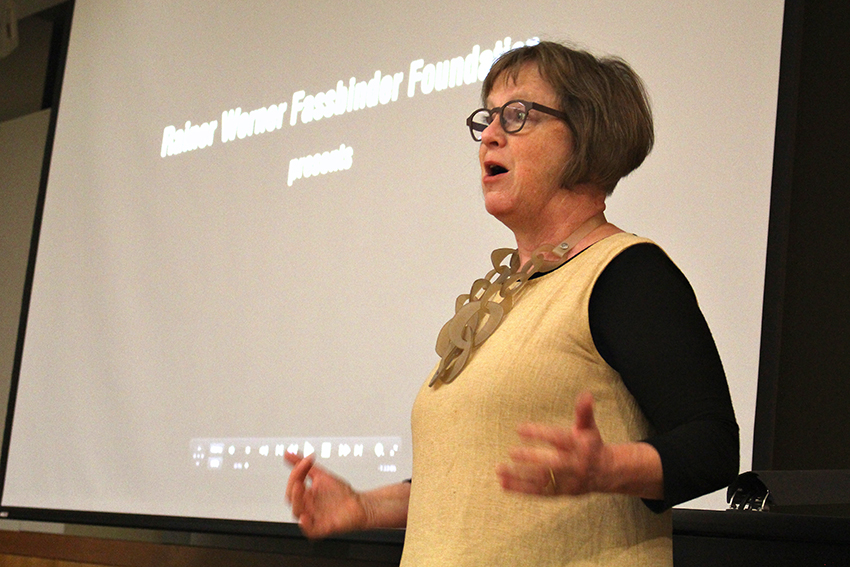 Arabic melody and the twang of a sitar filled the room as the lights dimmed for a screening of “Ali: Fear Eats the Soul,” part of the Faces of Migration film series.

The Department of History and Institute for Historical Studies screened the film, which takes the audience into the life of an elderly widow who falls in love with a Moroccan man 20 years her junior in post-war Germany. This was during a time of the so-called guest worker “problem,” in which men from the Mediterranean were invited to come rebuild Germany and help the economy, said Sabine Hake, professor of German literature and culture.

“I think it is still one of the most interesting films about migration,” Hake said. “What was planned as a guest worker program became an ongoing wave of immigration. There has been a significant forced adjustment to the reality of that. There’s been a shift in ideas of religious tolerance and cultural differences.”

The feature film series was presented by the department’s historical research publication, Not Even Past, and focuses on the divisive and unifying human experiences of migrants throughout different settings.

“It has a lot to say about what we have going on today, especially with the suspicion and distrust that people in America have about foreigners,” said Joan Neuberger, history professor and editor of Not Even Past. “It brings up all the issues without really talking about it.”

The themes in the film still prevail today when it comes to race and Arabic culture, said Kailey Hunt, international relations and global studies sophomore.

“A lot of it stems from ignorance of cultures,” Hunt said. “Watching films like this can help people today through the lack of understanding on personal levels. I think (the movie) really emphasizes that love can exist anywhere. We’re all people.”

Although German filmmaker Rainer Werner Fassbinder’s film touches on ageism, racism and migrant worker social issues, Fassbinder would not have wanted his film to be known as a social issue film, said Hake.

“For him, it was about the fact that love and desire are forces that are transcendent of boundaries,” Hake said. “What is really provocative is there are no good guys and bad guys. She falls in love with the guy from Morocco but also wants their wedding meal in Hitler’s favorite restaurant. We don’t get the satisfaction we get from a typical Hollywood film.”