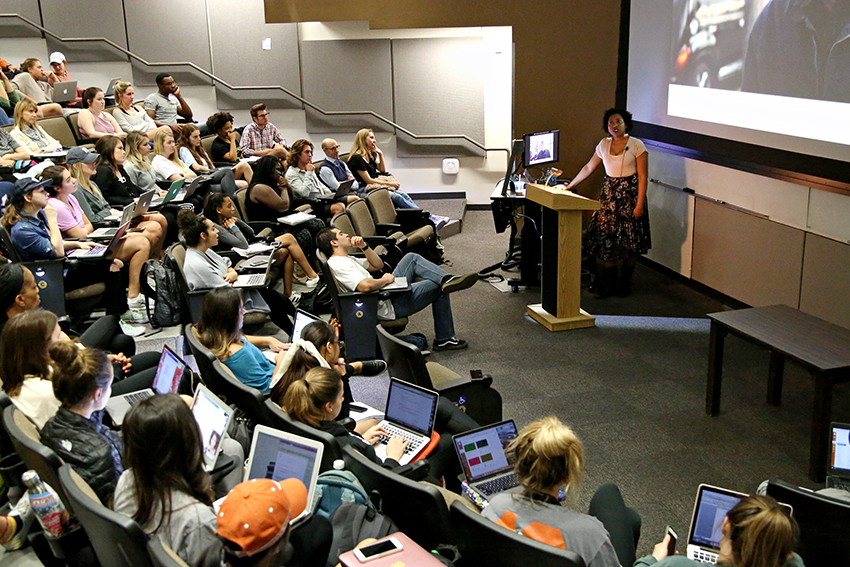 Americans have an unhealthy relationship with their history, especially when it comes to black history, actress and comedian Azie Dungey said to an auditorium of UT students Thursday afternoon.

“There certainly will be no George Washington without black people,” Dungey said. “So to tell a story about George Washington … and (to) not talk about his slaves is insane. They literally are the reason why he could leave Mount Vernon and have the pursuit of happiness.”

Dungey is the creator of the comedic web series “Ask a Slave,” which was inspired by her experience working as a character interpreter at George Washington’s Mount Vernon Estate in Virginia. The show satirizes people’s ignorance towards slavery in America, which is often avoided in conversations.

Dungey said her presence reminded guests of how America treated black people and often made them feel uncomfortable.

“If memory is identity, then my very presence at Mount Vernon was a threat to the visitors’ understanding of themselves as citizens, as people and as Americans,” Dungey said.

During the talk, Dungey listed ten common misconceptions about American slavery and debunked them.

One of the most popular misconceptions Dungey identified is that Africa was underdeveloped compared to Europe. To demonstrate, Dungey compared ancient European and African homes, and found little differences between the two.

“When we hear the narrative of white people coming to Africa and the Africans were swinging on trees and grass huts, that’s actually not true,” Dungey said. “That (narrative) was something that was obviously created later when we started to racialize in a new way.”

Dungey advised the audience to help solve this problem by encouraging hard conversations in institutions.

Dave Junker, director of the Moody College Senior Fellows Honors Program whose program co-hosted the event, said although the issue of slavery ended over a century ago, it is still relevant today.

“Slavery is not so easy to talk about, (and) it’s not exactly a conversation starter,” Junker said. “We might say that slavery is the elephant to the room of American history … (but) slavery still matters because inequality and prejudice still matters.”

Journalism junior Marina Navejas said Dungey taught her to approach the sensitive topic of slavery with empathy and understands now that lacking proper education can contribute to bigotry and racism.