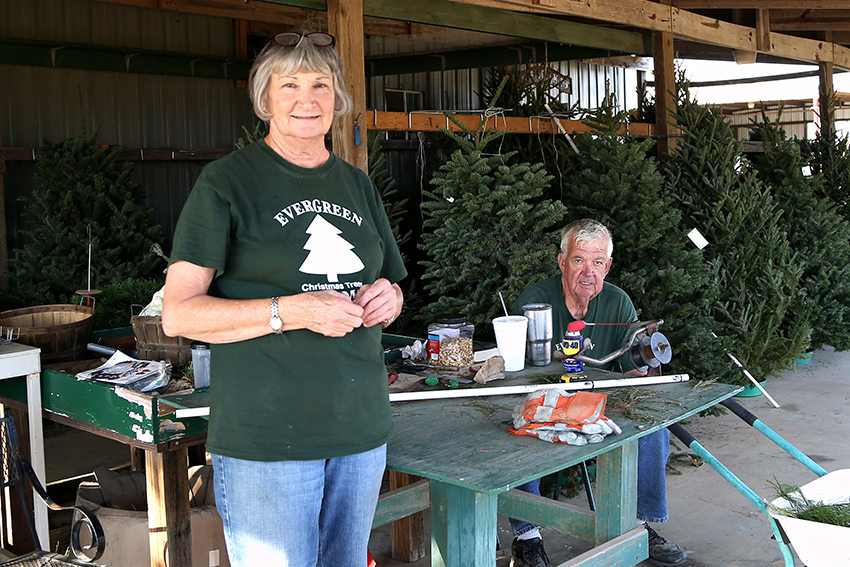 Driving down Monkey Road in Elgin, Texas, drivers are smacked across the face with the sharp scent of holiday spirit. Its source: a crop of green, triangle shaped trees creating, forcing an emerald green sea on the horizon.

At Evergreen Farm, the Walterscheidt family have made every effort for guests to get the most out of their holiday experience for almost 21 Christmas seasons. Like in a nativity scene, a donkey and three goats greet incoming cars near the gate as they enter the property. Here, shoppers can find everything from the perfect Christmas tree to wreath making classes under the roof of a small, wooden and metal shed.

“People come out here to make it an experience. It is not just dragging a tree out of the attic or just going to a tree lot,” said Beth Walterscheidt, who co-owns Evergreen Farm with her husband. “It is a whole-day experience for them, so it makes them slow down and enjoy each other.”

Evergreen, along with other local farms, allows visitors to experience the renowned holiday tradition of picking the perfect tree for their home, whether a pre-cut Washington fir or a Lone Star evergreen. Walterscheidt said they first had the idea for a farm when they lived in Michigan, but it didn’t become a reality until 1989, after they moved to Texas. Here, they waited five years to grow the trees, the average growth rate in the South, using an irrigation system to beat the droughts.

Austin area resident Jef Hahl, who has bought his Christmas tree from Evergreen for the past couple of years, said the farm is a reminder of his New York roots. He said when he moved to Austin, he was worried there wouldn’t be many options for tree farms here. After a fire burned down many of the trees in the Bastrop area in 2011, that became a reality.

“There is something special about being able to go around to find your tree and cut it down, as opposed to running to Home Depot and picking one that isn’t even from Texas,” Hahl said. “(The farms) provide a way to carry on a childhood tradition.”

Wendy Hale Davis of the Austin Optimist Club Tree Lot said they used to get part of their pre-cut trees locally, but were unable to continue doing so after the Bastrop fire. She said it will be another couple of years until they can begin selling Bastrop trees again because of the slow growth rate, and customers who once bought in Bastrop have begun visiting the Optimist Lot.

Davis said they opened this season the day after Thanksgiving with one of their most successful openings in 66 years of selling pre-cut trees to the Austin community. She said many visitors have told her they continue to support them because the Optimist Lot donates to local youth organizations.

“People want to do things for the community, and they want to give charitable giving (this season) — that is why you have blue and brown Santa,” Davis said. “People know that by coming here, they can give back to the community.”

As they begin this selling season, Walterscheidt said it is as enjoyable for them as it is for customers because of all the memories they get to witness being made as they help spread the holiday cheer.

“We got extended families now. Even the grandparents will come out with their grandkids, and they will sit up here and watch the kids play,” Walterscheidt said. “There is a lot of reward from those kind of things.”