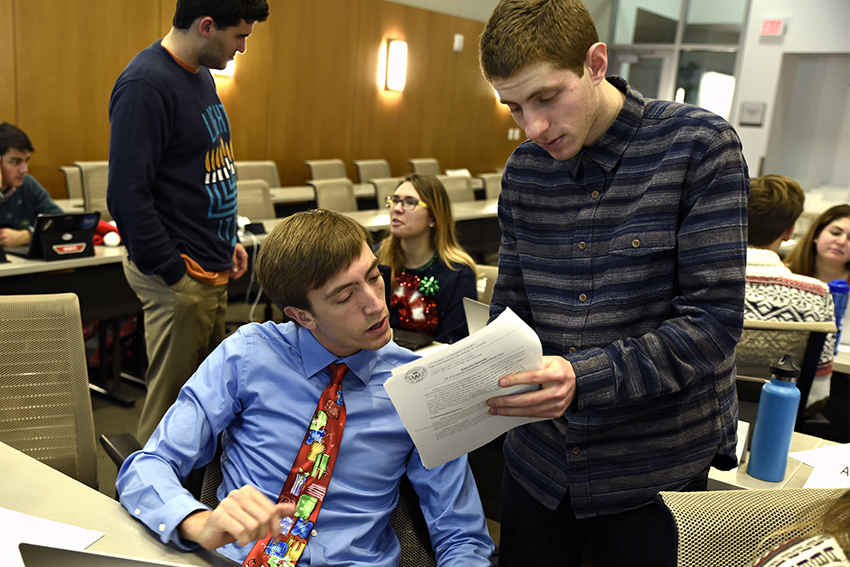 At the final Student Government meeting of the semester, members passed last-minute legislation and tabled others, most notably signing off on a resolution to form a student advisory commission with the Austin City Council.

Assembly Resolution 20 was fast-tracked with unanimous consent last night, supporting the renaissance of a college student task force originally formed by the Austin City Council in 2015, composed of students from each of the five major universities in Austin. The College Student Commission, to be officially voted on by Council on Dec. 14, would bring three UT students from diverse backgrounds to give the Council official input on issues
impacting student life.

Resolution co-author Alden Marshall said this initiative gives UT students the opportunity to work with local authorities on the decisions that often affect their lives in Austin.

“A lot of times, college students and young people in general are left out of the political process,” said Marshall, management information systems and government sophomore. “I think, here at UT, we’ve really shown over the past couple of election cycles that we’re willing, and we’re ready and eager to participate in this process and keep moving forward with that.”

The ordinance for the commission provides space for three students each from UT, St. Edwards University, Huston-Tillotson University, Austin Community College and Concordia University. It is a revival of the Student Quality of Life Committee formed in 2015, which was approved by City Council in May to be reframed as a
permanent fixture.

Mayor Pro Tem Kathie Tovo said the initiative has had a lot of support from City Council so far, and she expects the ordinance to pass next week as a significant step on behalf of
the city.

“We’ve been in a pattern as a city of reducing the number of boards and commissions,” said Tovo, who represents areas of West Campus. “The fact that the Council is willing to add another ongoing, permanent commission says a lot about how much the council values input
from students.”

The commission will meet twice a year and is expected to represent the diverse population of each campus, according to the city ordinance. Only one member from student government may serve on the commission at a time and each term will last two years.

Santiago Rosales, SG chief of staff, said he is supportive of the initiative because similar models have proven successful in the past, such as the UT President’s Student Advisory Committee and the UT System Student Advisory Council.

“What this commission would allow is for students to have a very formalized place where they can talk about those issues directly to city officials,” Rosales said. “We’ve seen this model work for student advocacy in other realms … it’s been a proven way of advancing
student interests.”

During the same meeting, a resolution in support of removing policy differences for women in coed intramural soccer and softball was approved, as well as a declaration of a mental health crisis at UT and in the state.