Jatarie White is moving past more than just defenders 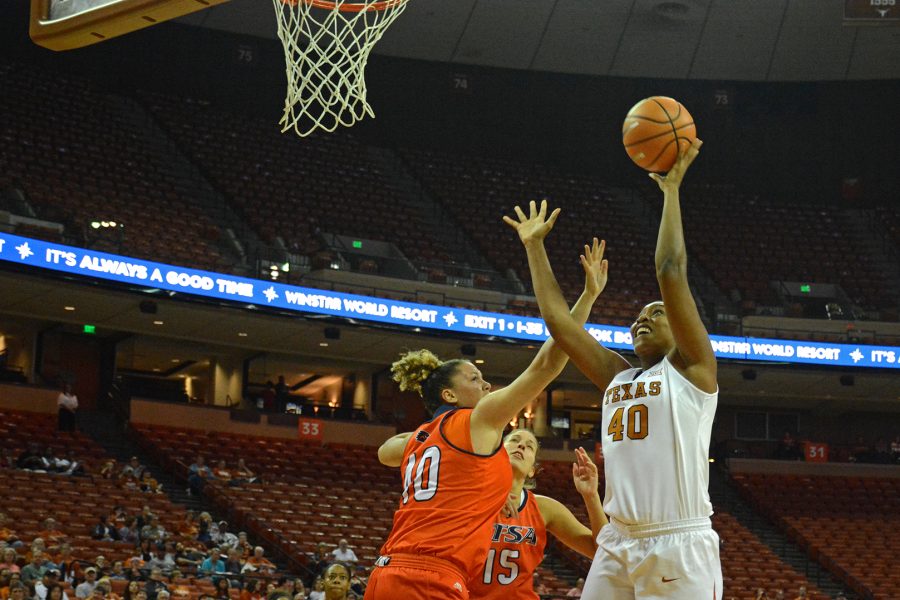 It took Jatarie White two dribbles to get where she needed.

During the third quarter in a game against Georgia on Dec. 3, the junior forward squared up with the rim, bounced the ball once to move to the left side of the lane and again to pivot to the center of the paint.

Georgia junior forward Caliya Robinson stuck to White’s hip the entire way. White dug in her bag of tricks to give her smothering defender the slip.

She ripped the ball overhead, sending Robinson in the air. White then leapt off of both feet and kissed the ball off the backboard with her left hand for two points. It was the up and under, White’s go-to move.

White’s run the same scam since high school. A Charlotte native, she helped lead Providence Day to four state championships. In her senior year, White was rated one of the nation’s top post prospects in 2014, drawing interest from North Carolina, Tennessee and Texas, among others.

“It’s pretty close to home and I felt really connected with (head coach) Dawn (Staley) when she was recruiting me,” White said. “So it’s like, ‘Why not here?’”

White was buried on the depth chart during her freshman year. The Gamecocks had two returning seniors at the starting post spots and also brought sophomore Alaina Coates and freshman A’ja Wilson off the bench, both highly acclaimed forwards.

White played sparingly in the early part of the season but suffered a stress fracture in her foot in early December 2014 that sidelined her for a month.

“It was devastating,” White said. “When I got back, it was like everybody was in their groove and already had their chemistry going.”

White eventually earned back her minutes, but a setback with her foot injury left her with the same role her sophomore year.

In two seasons for the Gamecocks, White missed 20 games. Her self-confidence had plummeted and she wanted more from her college experience. Frustrated, she realized she had to get out of Columbia.

“It was like I was going through this period when it felt like nothing I could do was right,” White said. “Nobody was really there for me to help me mentally. Back then, I just couldn’t take that.”

Six days later, White announced her decision to transfer. Eager to find a new team better equipped to support her, one school stood out early in the process.

“(Head) coach Karen (Aston) was still as enthusiastic as she was when Jatarie was much younger,” Monica said. “That makes you feel good.”

White committed to Texas on June 7, 2016, but couldn’t play for one year due to the NCAA transfer rule.

In the 2017 NCAA Tournament, Texas lost 77-66 in the Elite Eight to Stanford. Stanford lost to South Carolina in the next round and the Gamecocks went on to win the national championship over Mississippi State. White could only watch it unfold.

She took the year to build up her confidence and improve her academic focus. Still, White felt like she could have made a bigger impact.

“It’s pretty difficult knowing that you’re coming out here and practicing and trying to get better, but not really helping your team on the court,” White said.

Now a junior and eligible to play again, she hopes to accomplish what she couldn’t at South Carolina. The 6-foot-4 center has settled nicely into her new home, starting in six of seven games this season. She’s averaged 11.4 points and 5.3 rebounds in 19.1 minutes per game en route to a 7–0 start.

She credits her year off for easing the transition with her new team and doesn’t think about what she would do differently. Her ability to bounce back has left Aston believing White still has the ability to grow.

“Nothing Jatarie does is ever going to surprise me,” Aston said. “She’s just kind of getting her feet wet. I mean, she hadn’t played in a while. And she’s anxious. She’s learning. It’s still all new to her.”

White and the Longhorns take on the Tennessee Lady Volunteers on Sunday. Tipoff in Knoxville is set for 2 p.m.