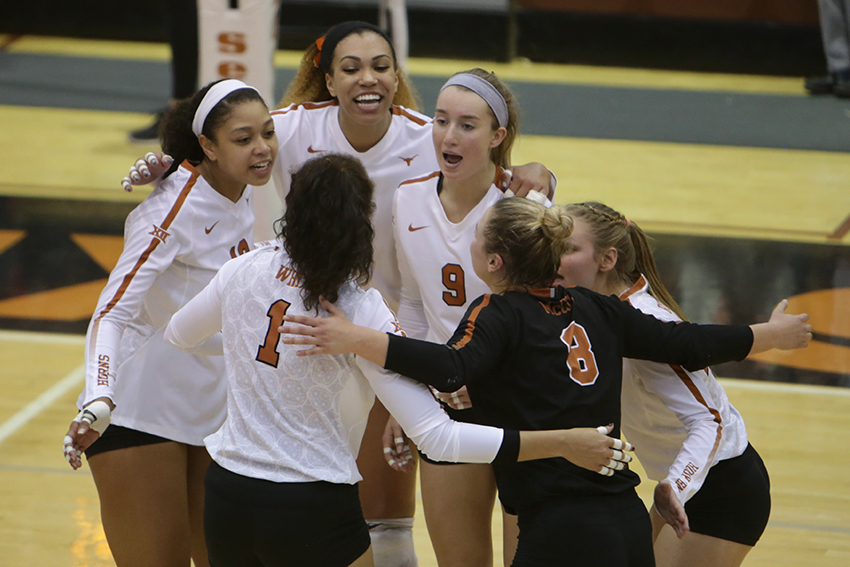 Texas survived a 3-2 nail-biter on Friday in Palo Alto, California, fending off Utah in an elimination match to advance to the Regional Finals.

After splitting the first two sets, both teams came out swinging in the third. The two sides fought neck-and-neck, unable to claim a lead of more than two points through the first half of the set.

Utah finally created some separation, taking a 20-17 lead. But the Longhorns responded, going on a 3-0 run for the score.

But the Longhorns couldn’t claim a lead down the stretch. A back-breaking kill by Utah’s freshman outside hitter Dani Barton secured the 26-24 victory, giving the Utes a 2-1 set lead.

With their season on the line, the Longhorns found their rhythm in the fourth set, exploding to take a 7-3 lead fueled by a pair of kills by Bedart-Ghani.

Texas played its most complete set of the match, hitting a game-high .444 and recording just one error as the Longhorns forced set point, 24-19. A short Utes rally came to an abrupt end with an untimely error, giving Texas a 25-21 and forcing a fifth set for a trip to the Regional Finals.

“Something about this group is very resilient,” senior middle blocker Chiaka Ogbogu said. “Our focus regardless if we’d won the point before is the next point and how we can get it.”

Every point was a battle in the fifth frame as both teams fought for another day. After a back-and-forth fiasco, Bedart-Ghani ignited the Longhorns with a crucial kill to take a 14-13 lead and reach match point. Utah responded, though, as junior middle blocker Berkeley Oblad landed a kill from the side to tie things up.

With the score tied, Bedart-Ghani came at the Utes again, this time with a soft tap that landed just out of the reach of the outstretched defender, bringing Texas to a second match point.

After a bad set by Utah that led to a free ball for Texas, freshman setter Ashley Shook lobbed the ball in the direction of Bedart-Ghani. She elevated, cocking her hand back for one final swing.

With a thud that echoed through the arena, Bedart-Ghani sent a bullet towards the right corner of the court. Utah had no chance. The ball bounced off a Utes defender and hit the ground, giving Texas the 16-14 victory.

The Longhorns bench spilled onto the court. Freshman outside hitter Lexi Sun, who’d been benched for Bedart-Ghani for most of the match, was one of the first players to embrace her.

Bedart-Ghani finished with 12 kills and a service ace to top it off. Shook delivered dimes the whole way through, posting 50 assists in a win that pushed the Longhorns to their limits.

“We realize that it’s not going to be an easy clean sweep from now on,” Bedart-Ghani said. “It’s about finding a way to regroup and bounce back. We weren’t concerned with the score. We were just focused on how do we get better the next set and prevent a loss from happening.”

With the win, the Longhorns advances to a Saturday match at in Palo Alto, where they’ll take on the winner of No. 3 Stanford and Wisconsin for a trip to the Final Four.

Texas will play on less than 24 hours of rest, but the Longhorns say they are up to the task.

“The tournament is about surviving and advancing,” head coach Jerritt Elliott said. “Our focus is to get rested and put a good game plan together for tomorrow night. We know we’ll need to battle and find a way to win.”