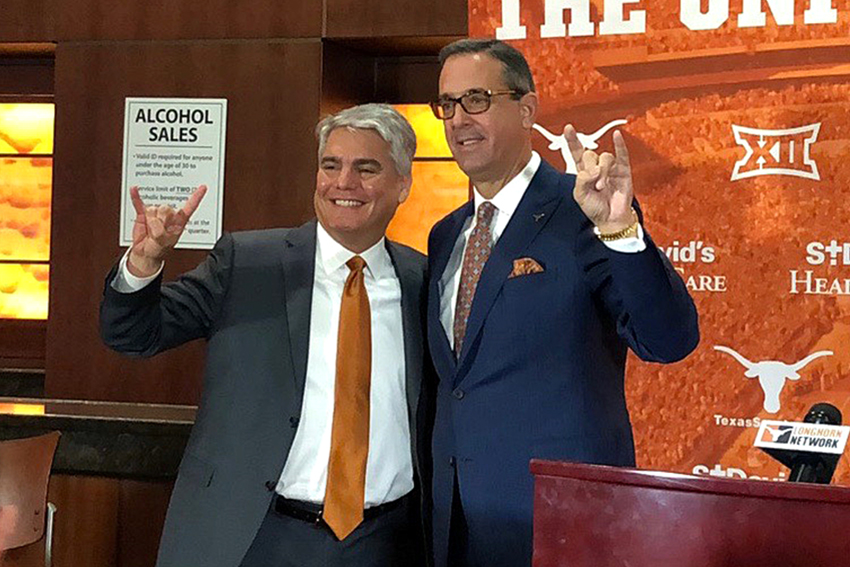 Walking in New York City last week during the National Football Foundation meetings, Chris Del Conte received a phone message that altered not only his career, but his life.

Del Conte promptly arrived at the restaurant and headed for a back corner. There waiting for him was UT President Gregory Fenves, preparing to discuss Texas’ athletic director position.

“When he said, ‘I want to talk to you about this position,’ I was floored. I was honored,” Del Conte said. “We have one rodeo. My thought was if I'm ever going to do it, why not now? Why not at the University of Texas? It’s like riding a bull — you got eight seconds, let's hang on, see what we can do.”

Del Conte metaphorically jumped on that bull as he walked into Bellmont Hall inside Darrell K Royal-Texas Memorial Stadium on Monday morning and was introduced as Texas’ new athletic director.

Countless big names were in attendance to see Del Conte — from former head coaches Mack Brown and Jody Conradt, to current head coaches Shaka Smart and David Pierce, to former athletic director DeLoss Dodds, who Del Conte praised as being “a beacon in our industry, someone I looked up to my whole life.”

Del Conte fought back tears in the opening moments of his press conference.

“By the way, I'm an amazing crier,” Del Conte said. “I cry when we win. I cry when we lose. It’s OK to show emotion because it means you're real.”

In a certain way, he was amazed that he had taken this job. Del Conte built a strong reputation as one of the nation’s top athletic directors while at TCU. He took the athletic program of a small private school to new heights with a transition into a Power 5 conference and massive donor-funded projects, including building a new football stadium and renovating a basketball arena.

“I think that's why you come to the University of Texas, for that challenge,” Del Conte said. “If you’re not ready for those expectations and challenge, you should not be at this podium.”

Del Conte repeatedly passed on answering the hard-hitting, program-altering questions on Monday. He was asked about the new on-campus basketball arena, the potential seating expansion of the south end zone at Royal-Memorial Stadium, turnover in the Longhorn Foundation, fundraising and renewing the rivalry with Texas A&M.

The decision-making will come in due time for Del Conte. Above anything else on Monday, he just wanted to get acclimated with his surroundings. It was just his first day on the job.

But the days ahead are where Del Conte will have to prove his billing. He said he’s going to do “an extensive deep dive over the next two months (and) analyze strengths and weaknesses.” Texas certainly has a host of priorities on the agenda for the future.

“For the next several months, it will be looking and learning,” Del Conte said. “I don’t have all the answers. I have an opinion — an opinion that's shared by 500,000 living alumni, 60,000 students, 500 athletes. We will all have that conversation and share those, look to what's right. There’s not an answer tomorrow.”

Fenves said the hiring of Del Conte came at a good time for Texas, noting that the football regular season had ended. And Fenves also knew that Texas was not the only school potentially interested in Del Conte.

“I wanted to be ahead of any other potential searches,” Fenves said. “Chris Del Conte is a hot commodity. I wanted to get him here to Texas before he had too many other alluring offers.”

It’s widely known that outgoing athletic director Mike Perrin was never expected to be Texas’ long-term solution, despite having the interim label pulled in December 2015. A former linebacker under legendary Texas coach Darrell Royal, Perrin was brought in for damage-control and to repair relationships that had been broken during Patterson’s tenure.

Del Conte is now the one many Texas fans and supporters expect to move the athletic department forward into a new and brighter era.

“He’s really a special person and will take our program here to even greater heights,” Perrin said.

But before his ceremonious introductory press conference Monday morning, Del Conte found himself in a moment of tranquility, saying a prayer in a suite inside Royal-Memorial Stadium.

And seemingly just to hammer home the point that life was now truly different for Del Conte, he got a humorous phone call Monday morning from TCU football coach Gary Patterson.

“I love you, but I hate you today,” Patterson said to Del Conte.

Del Conte had also received a text last week from his 16-year-old daughter that stuck with him on Monday, reading it aloud for everyone inside Bellmont Hall.

“Life is all about taking risks,” the text said. “If you never take a risk, you’ll never achieve your dreams.”

The task he has ahead of him now is a monumental one. Texas’ athletic department is a large business all on its own, one with its main revenue-producer — football — struggling on the field and searching for a starved return to national prominence.

Del Conte knows what he’s getting himself into.

But he also sees the chance to fulfill a mission.

“We know when this place is rowing the boat in the same direction, there’s nothing that can stop it,” Del Conte said. “Mike (Perrin) calmed those waters and put us in a position today that it is a tsunami coming with a reckoning. My job is just to guide that.”