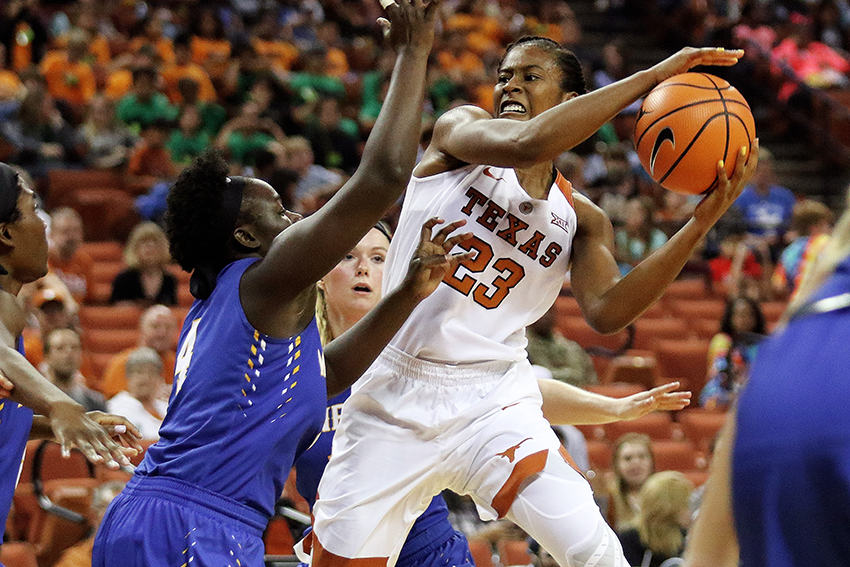 Texas started its home game against Northwestern State on Wednesday night in a familiar position.

No junior forward Khaleann Caron-Goudreau. No junior forward Jordan Hosey. No senior guard Brooke McCarty. It was the same way the Longhorns finished their game versus then-No.11 Tennessee on Dec. 10.

Caron-Goudreau hadn’t played since Nov. 25 after suffering a stress injury in her right foot. Hosey went down in the third quarter against the Lady Volunteers and didn’t return. McCarty fouled out late in the first and Tennessee won the game, 82-75.

The trio was unavailable again against the Demons. Caron-Goudreau remains on an indefinite timetable to return. Hosey was ruled out with a concussion sustained during the Tennessee game. McCarty, who had played in all 113 games of her collegiate career, was also ruled out with a left hip injury. Both injuries are listed as day-to-day.

Heading into the game, it was unclear whether Texas would be able to shake the plagues that haunted them in Knoxville. A shorter bench meant more minutes for inexperienced players and lineups with less chemistry.

“I definitely think that our team has a bit of a hangover from the Sunday loss,” head coach Karen Aston said. “We’ve hit a bit of a lull with our energy level.”

Sophomore guard Alecia Sutton started in place of McCarty and senior forward Audrey-Ann Caron-Goudreau sopped up most of the minutes of the missing forwards. Both played the entire first quarter and finished the game combining for eight points in 43 minutes.

With a weaker perimeter unit, Texas focused its offensive efforts on the interior. Junior transfer center Jatarie White towered at least two inches over each Northwestern State defender and led the team with 15 points. The Longhorns outscored the demons 40-10 inside the paint.

“Coach (Aston) made it a big responsibility for the post players to make sure we are burying our opponent because of our height advantage,” White said. “So, second half, we had to make sure we paid more attention to that.”

Still, even as Texas dominated down low, the Longhorns didn’t have the same offensive firepower. They shot just 25 percent from three and scored just nine points in the fourth quarter. Texas went on to win the game 68-44, the team’s lowest scoring output of the season.

Without its regular rotation, Texas relied on senior guard Ariel Atkins to push them to victory. Atkins finished the game with 13 points on a perfect six-for-six shooting performance and chipped in seven rebounds and three steals. As a senior, Atkins knows how to navigate when the team doesn’t have its same depth.

“Over-communicate,” Atkins said. “I think that’s something that we’re really just preaching right now, just communication. Over-communicating, making sure that even though they might not be comfortable in that situation, that they understand what they’re supposed to be doing.”

The Longhorns take on No. 12 Florida State on Sunday at the Frank Erwin Center, with tip-off set for 11:30 a.m. Aston hopes her team is able to rekindle its early season spark.

“They’re kids and I don’t really know sometimes what’s going on,” Aston said. But we’ve got to figure out how to flip the switch again and just have a little bit more urgency about the way we’re playing the game.”