Chancellor William McRaven to leave UT System in May 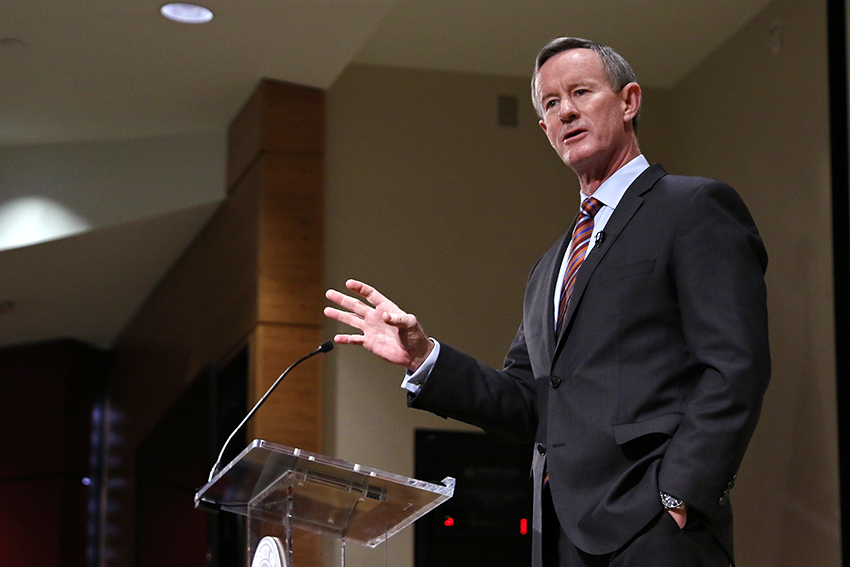 Chancellor William McRaven announced he will leave the UT System in May at a special Board of Regents meeting today.

McRaven, a renowned former U.S. Navy admiral and UT Austin alumnus, was appointed by the Board of Regents as chancellor and CEO of the UT System in 2015.

McRaven was the first and only UT System chancellor to be hired on a contract, so his contract’s end this month raised questions about his future. Last week, the UT System spokesperson said he would remain as Chancellor beyond the expiration of his contract.

However, during his announcement today, McRaven said “not serious” health issues in the last year caused him to rethink his future and decide to step down in May.

“As I enter the fourth quarter of my life, there’s still a lot of things I want to do. I want to teach. I want to write. I want to do some traveling and as hackneyed as it sounds when someone is stepping down, I want to spend more time with my family.”

Chancellor McRaven, 61, revealed a previous battle with cancer during his time fighting the Taliban in a 2015 commencement speech at UT Southwestern Medical Center in Dallas, one of the UT System’s 14 universities and health institutions.

Earlier this November, McRaven was briefly hospitalized for a "perfect storm of bad health," but said he felt better within a few days.

Sara Martinez Tucker, chairman of the Board of Regents, said she was glad McRaven decided to stay until the end of the academic year upon the Board’s request.

McRaven said there is still work to do before his departure, and he remains fully committed to securing a contract to run the Los Alamos National Laboratory. The UT System submitted a management contract on Monday, and winners will be announced in the spring.

“I think this initiative is one of the most important in the history of the UT System,” McRaven said. “We have put together a world-class team to run the lab."

Expanding the UT System’s role in national security and research has been one of McRaven’s ambitious goals, titled “Quantum Leaps,” for the UT System. State leaders and UT System regents have previously questioned spending on some of these goals, including a $215 million purchase of Houston land that is currently being resold.

The Board of Regents thanked and praised McRaven for his leadership during his retirement announcement.

“Your legacy for me, Chancellor, will be to think big and to think bold as we define our strategy to lead each of our 14 academic institutions,” Tucker said.

"Chancellor McRaven has been a great leader over the last three years and I have been honored to work together with him,” Fenves said in a statement. “We owe him our deepest thanks for his service and dedication, especially to the flagship campus of The University of Texas System."