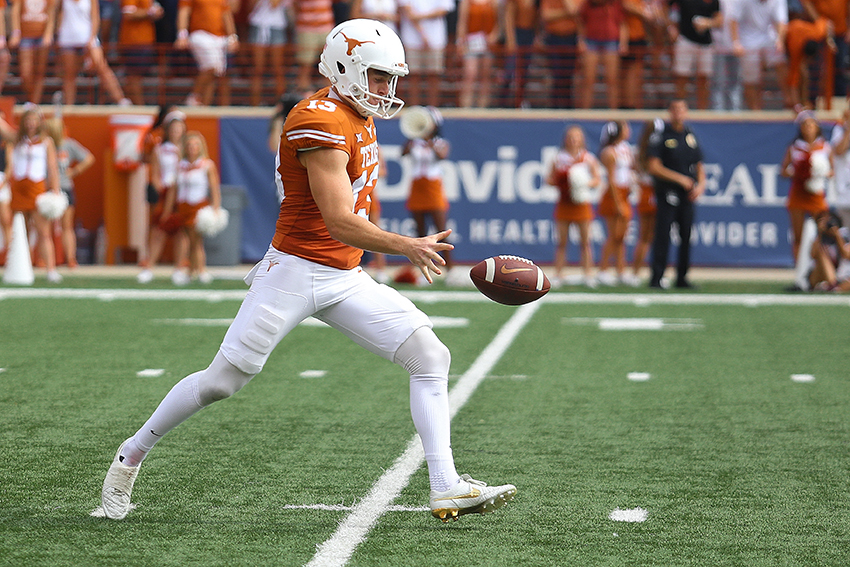 Junior punter and Ray Guy Award winner Michael Dickson announced on Thursday that he will forgo his senior season and declare for the NFL Draft.

“Coming to play football for the University of Texas has been the greatest experience of my life,” Dickson said in a statement. “I am so thankful for Coach Strong giving me an opportunity back in 2015. Texas has helped lead me in the direction I want to be as a person. I have built an undeniable bond with my teammates that will last forever. I truly consider all of you my brothers.”

Dickson is the fourth Longhorn to have declared for the draft since the end of the regular season, joining junior left tackle Connor Williams, junior cornerback Holton Hill and junior safety DeShon Elliott. But unlike those three players, Dickson will still play in the Texas Bowl against Missouri on Dec. 27.

Dickson’s junior campaign was one for the books. It culminated in him becoming a unanimous first team All-American and winning the Ray Guy Award earlier this month, given to the nation’s best punter.

He pounded a career-long 76-yarder against TCU on Nov. 4, which was the fifth-longest punt in the nation this year.

“The Texas fans have showed me so much more love than I ever expected,” Dickson said. “To be able to see and hear the appreciation from the fans each week is something that I genuinely cherish. I’m so grateful for what this country has provided me and feel as though Texas has adopted me as one of their own. I’m proud to be a Texan.

“I am excited for the opportunities that lie ahead and know that I will forever be a Texas Longhorn. I’d like to thank Coach Herman and the current staff for a great year. Thanks for understanding and supporting me throughout my decision-making process.”

The loss of Dickson next season is a big blow for the Longhorns, but Texas has already found his replacement.

Dickson’s cousin, Ryan Bujcevski, who also hails from Australia and the same training academy as Dickson, signed with Texas on Wednesday during the early signing period and plans to enroll early.

Herman said on Wednesday he has a long relationship with Prokick Australia, the punting and kicking academy that Dickson and Bujcevski trained at.

“When those guys (at Prokick) say this guy is the next whatever, you believe them because they’re that good that their job,” Herman said.