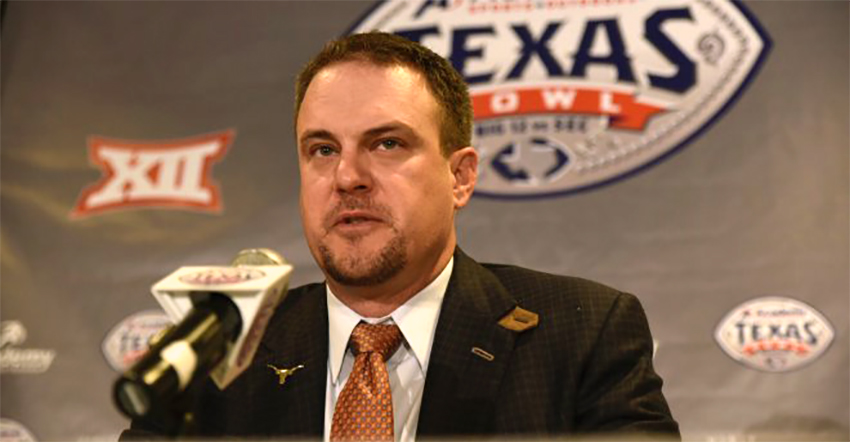 HOUSTON — Much can be debated about the big-picture importance of Wednesday night’s Texas Bowl in regard to head coach Tom Herman and his 6–6 Longhorns.

And then there are those who will argue that this game doesn’t mean much, and that Texas has already made its bed with the 2017 season. The Longhorns experienced multiple disappointing close losses to highly-ranked teams and a devastating defeat to Texas Tech in the regular season finale.

But don’t try convincing Herman that this game isn’t one to get up for.

“We haven’t been in a bowl game in three years, so if that doesn’t excite you as a player, then you probably need to quit football and go do something else,” Herman said at his bowl press conference on Tuesday morning in downtown Houston. “Go join a club or something like that.”

The big storyline for the Longhorns is that they will be without a bevy of players against Missouri. Since the Texas Tech game, Texas has taken hit after hit to its depth chart.

Junior running back Chris Warren III announced he will transfer. Junior left tackle Connor Williams, junior safety DeShon Elliott and junior cornerback Holton Hill declared for the NFL Draft (though Hill had already been suspended for the rest of the season for a violation of team rules following the TCU game on Nov. 4).

Junior defensive back P.J. Locke III, who hasn’t played since suffering an ankle injury against Baylor on Oct. 28, is finally healthy and will start in Elliott’s stead. Junior Elijah Rodriguez, who missed the entire regular season with an ankle injury, will start at left tackle in place of Williams.

On Friday, the day the Longhorns arrived in Houston, freshman running back Toneil Carter, sophomore wide receiver Lil’Jordan Humphrey and junior tight end Garrett Gray were suspended for the Texas Bowl due to a violation of team rules. That same day, it was announced that junior defensive tackle Chris Nelson will miss the bowl game after suffering an elbow injury in practice.

“A lot of things go on within the season,” junior left guard Patrick Vahe said. “You never know what’s gonna happen — whether it’s an injury, a coaching change, players leaving, players getting suspended, you never know. Man down, man up.”

To make matters worse, junior linebacker Malik Jefferson likely will not play due to a turf toe injury.

“But I’m hoping for a miracle,” Herman said about Jefferson.

And, of course, there is the quarterback situation.

Sophomore Shane Buechele will start, but freshman Sam Ehlinger will still play. Herman said on Tuesday that there will still be a “clean slate” heading into the offseason at that position, regardless of what the two quarterbacks do on Wednesday night.

The Longhorns will be facing a Missouri team riding high after finishing the season on a six-game winning streak. Junior quarterback Drew Lock leads a potent offense for the Tigers that’s ranked top-10 nationally in scoring and total offense.

“We’re gonna have our hands full on defense,” Herman said.

Lock leads the nation in passing touchdowns and ranks fourth in passing efficiency. It doesn’t bode well on paper for a Texas team that will be playing without its two best defensive backs in Elliott and Hill. But that doesn’t mean Lock is necessarily licking his chops either.

“They do have some guys out, but the way we’re looking at it is their next guy up is just as good as their guy that’s leaving,” Lock said.

For what it’s worth, the Tigers are 2.5-point favorites over Texas on Wednesday night at NRG Stadium.

Beating Missouri could in a way provide a shot in the arm for the Longhorns heading into the offseason, already possessing some momentum from the early signing period when Texas signed 19 players. Herman currently has Texas with the No. 3-ranked recruiting class in the nation.

Texas has a unique opportunity in this bowl game. And even while recognizing that this isn’t a must-win game, Herman knows what a bowl win could do for the program that he’s been tasked with bringing back to national prominence.

“I think winning this game would be important for us in terms of momentum,” Herman said. “It’s not life or death, but we sure as heck could use this to springboard us into the offseason for 2018.”