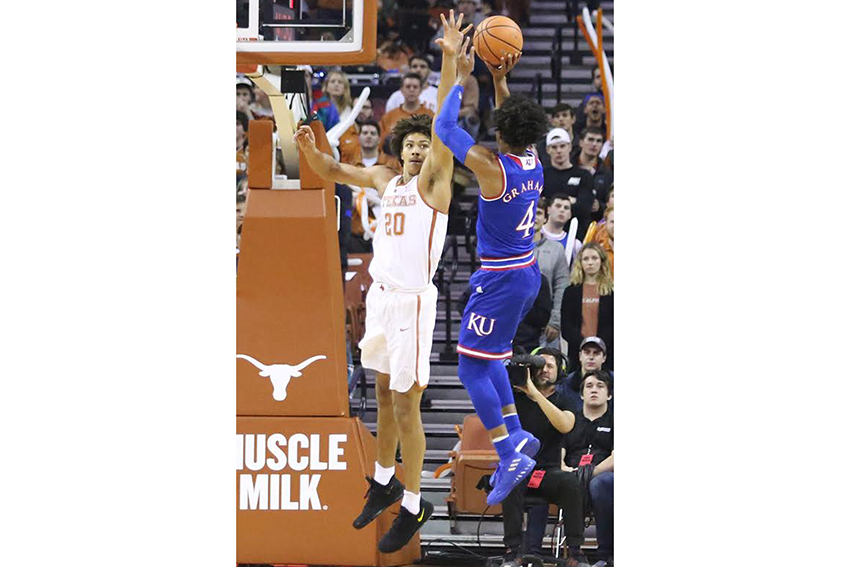 Texas hosted No. 11 Kansas on Friday night at the Frank Erwin Center for the Big 12 opener, but the Jayhawks’ blistering 17 threes overpowered the Longhorns, 92-86, in front of a crowd of 15,802. Here are four thoughts from Friday night’s game:

All that Kansas head coach Bill Self could do was scratch his head in bewilderment.

As he briefly reflected on the shot-blocking exhibition that Texas freshman forward Mo Bamba displayed on Friday night, Self sat at the podium incredulously during his postgame press conference.

“The guy could block the sun,” Self said of Bamba.

Bamba finished the night with a career-high 22 points, 15 rebounds and eight blocks, but it wasn’t enough to lift Texas to a what would’ve been a mammoth home upset.

It must’ve felt like deja vu all over again for Self, who saw his Jayhawks come into Austin last season and topple the Longhorns 77-67 despite a huge effort from another Texas freshman big man, Jarrett Allen, who now plays in the NBA for the Brooklyn Nets.

Former Texas bigs Tristan Thompson and Chris Mihm previously held that record with seven blocks in a game (Thompson did it once, Mihm twice). Bamba was one block shy from tying the school record for most in a game. Cam Ridley holds that record with nine.

Bamba got off to a roaring start with multiple big dunks and rejections. He scored 11 of Texas’ first 13 points, and Kansas knew right away what it was dealing with for the rest of the night. Bamba, however, cooled down in the second half with only six points.

Bamba’s effort was his most impressive to date at Texas, but he knew after the game that the Longhorns still hadn’t made the statement that they desired.

“There’s no such thing as a statement game if you lose,” Bamba said. “But there’s definitely hope out of this.”

Kansas overwhelms Longhorns from beyond the arc

There were times on Friday night when the Longhorns may have felt like they were playing against the Golden State Warriors. But you could make the argument that the Kansas Jayhawks are already college basketball’s version of the NBA’s 3-point shooting powerhouse.

The pure shooting talent of Kansas’ guards was on full display. The trio of Devonte’ Graham, Lagerald Vick and Sviatoslav Mykhailiuk led the way for the Jayhawks, combining for 64 points on 16-30 shooting from beyond the arc.

Self said afterward that he told his team before the game it needed to shoot 35 threes. The Jayhawks finished the night 17-35 from beyond the arc. It was ultimately the difference in the game, as the Longhorns just couldn’t keep pace in the second half with Kansas’ hot shooting. Texas was just 7-25 from the 3-point line.

“It definitely shifted the energy of the game,” Bamba said.

It’s a program that Texas has at times flirted with, but has never really been able to come close to matching.

Head coach Shaka Smart wasn’t necessarily hired away from Virginia Commonwealth to make Texas into Kansas. The Longhorns aren’t known historically for their basketball prominence. But Smart does know Texas is capable of beating a team like the Jayhawks on any given night.

Of course, year in and year out, the Jayhawks produce tremendous 3-point shooting — stuff that has been a foreign concept around the 40 Acres for a long time. J’Covan Brown and A.J. Abrams — two of Texas’ most recent and successful sharpshooters — have long been gone, and not having consistent shooting that those two players provided has likely held Texas back the past few seasons.

But Kansas seemingly possesses players like those every season. Texas just doesn’t.

Asked after the game how big the gap between Texas and Kansas is right now, Smart admitted that 3-point shooting was the outlier in all of this.

“Well, tonight (the gap) was six points,” Smart said. “Obviously they’re one of the best 3-point shooting teams in the country. Tonight was an extreme for them, but they make shots at a high level. It’s probably the biggest difference.”

Andrew Jones returns, but is limited

Sophomore guard Andrew Jones had missed Texas’ last four games with a wrist injury entering Friday night’s bout with Kansas. Smart said on Thursday that Jones was not going to start but that he could still possibly play.

Jones was a full-participant in pregame warmups on Friday night and didn’t appear to be bothered by his wrist when shooting the ball.

But he logged only nine minutes against Kansas, chipping in five points on 1-3 shooting. Jones will have to get back to full strength soon as the Longhorns are beginning their Big 12 schedule. It’s a conference that night in and night out is arguably the most demanding in the country.