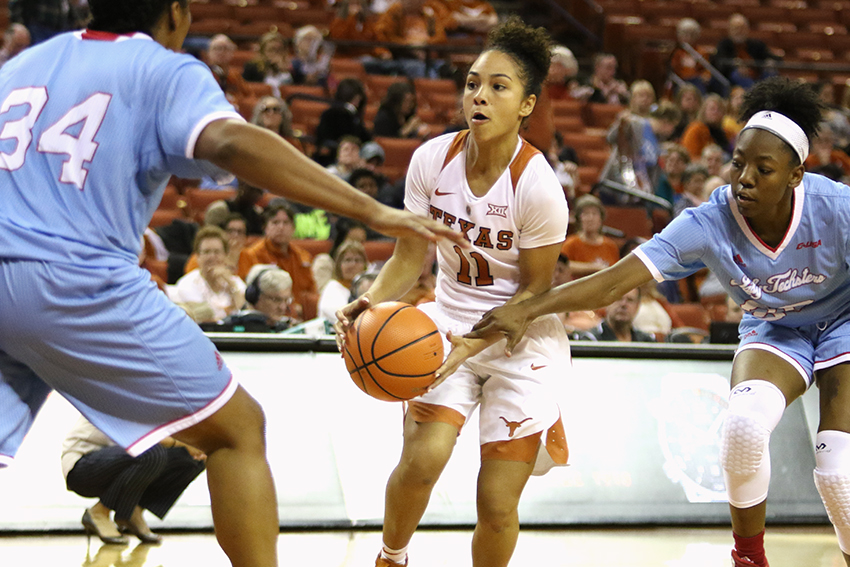 The Horned Frogs had completely lost track of time.

After slowing the pace and dribbling around the top of the arc late in the third quarter, no player recognized that the shot clock was down to five seconds. The ball casually swung around, ultimately landing in the hands of TCU sophomore forward Adeola Akomolafe.

With just two seconds left on the shot clock, Akomolafe saw the time and quickly launched what was only her second 3-point attempt of the season.

Texas head coach Karen Aston watched as the ball sailed and hit its mark, finding the bottom of the net as the shot clock expired with 1:11 left in the quarter. It was that kind of night for Texas.

The Longhorns suffered their second loss of the season on Wednesday night in Fort Worth, falling to TCU, 79-77.

After entering the second quarter with a comfortable 22-14 lead, Texas was ambushed by a 13-1 TCU run. In just four minutes, the Longhorns found themselves down 27-23.

The Horned Frogs piled it on, lighting up the Longhorns for 26 points in the second quarter and entering the half with a 40-31 lead.

Texas came out with a sense of desperation to start the third quarter, stifling TCU’s offense with a half-court press.

The Longhorns also found their range as senior forward Audrey-Ann Caron-Goudreau drained a three to cap off an 11-2 run and tie the score at 42 with 8:01 left in the quarter. But TCU kept its cool, regaining the lead and entering the fourth quarter up 60-57.

The final quarter could only be described as madness. Both teams battled, resulting in a 71-71 standstill with 1:17 left to go.

After getting fouled while diving for a loose ball, sophomore guard Alecia Sutton went to the free throw line. Sutton had only shot 40 percent from the line on the season, but she calmly sank both free throws to give Texas a 73-71 lead. TCU senior guard Toree Thompson answered on the following play, creating separation from senior guard Brooke McCarty and draining a step-back three with 53 seconds left.

With the pressure now on Texas, senior guard Ariel Atkins elevated from mid-range, nailing the jumper to put the Longhorns back on top, 75-74, with 39 seconds left.

Once again TCU responded with a three, and once again Atkins came through with a mid-range bucket, this time to tie the score at 77 with 16.5 seconds.

After a pair of free throws by the Horned Frogs, Texas found itself down two with six seconds left. A broken play led to a desperation three at the buzzer by junior guard Lashann Higgs that failed to even hit the rim. It was over.

Atkins finished with a game-high 25 points to go along with six rebounds. Higgs totaled 18 points on the night.

The loss marks the first conference loss of the season for Texas (13-2, 4-1 Big 12). The Longhorns look to gain momentum when they host Kansas at 1 p.m. on Saturday before No. 1 Connecticut travels to Austin for a heavily anticipated matchup Monday night.