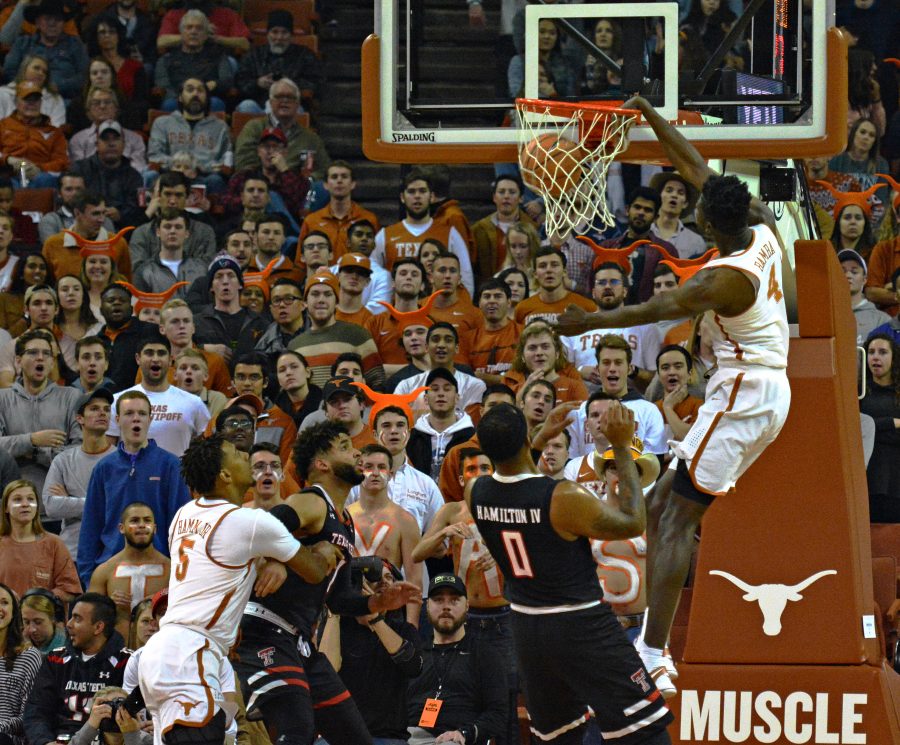 Texas managed its second home upset over a ranked opponent in a week on Wednesday night, handling No. 8 Texas Tech, 67-58, at the Frank Erwin Center. Here are five takeaways from the commanding performance:

Junior guard Kerwin Roach II returned to action on Wednesday night from a fractured left hand, and it couldn’t have come at a better time for Texas. The difference between the third-year guard on versus off the floor showed against the Red Raiders on Wednesday.

In the absence of Roach, Texas has been forced to slide junior forward Dylan Osetkowski to the small forward spot or use one of its many combo guards. Sophomore Jacob Young, junior Eric Davis Jr. and freshman Jase Febres, while important role players, are distinctly shooting guards and have been largely unable to fill the void left by Roach.

“It’s huge for what (Roach) was able to do for our team tonight,” head coach Shaka Smart said. “You have another level of athleticism and burst as a team with him in there.”

Roach’s return helped tremendously in spacing the floor and gave freshman guard Matt Coleman a much-needed chance to play off the ball for parts of the game. Roach didn’t start, but within minutes of entering the game, he punished the sagging Texas Tech defense with a pair of corner threes.

With under two minutes to play, Roach sliced through the lane and ignited the Frank Erwin Center with a huge slam with his right hand, capping the Longhorns’ rally. He stood for just a moment, staring at the crowd, as if to say, “I’m back.”

The junior finished the game with a season-high 20 points on 50 percent shooting from the floor. His return elevated the Longhorns and allowed Smart to cease the three-big lineup.

Though done mostly out of necessity, the big-man lineup Texas has shown for three games needs to be put to rest.

The length it provides, while stifling around the rim, often results in slow closeouts. Texas Tech found its first two field goals from beyond the arc to jump out to an early lead. Despite opening with three forwards, Texas opted for a more traditional rotation for most of the contest after it became clear Roach would be playing heavy minutes.

But Texas went back to it for stretches in the second half. Early in the half, Texas ran a set that resulted in Osetkowski running off a screen and taking a quick three in the corner. Although it was a good look, the play seemed at odds with the personnel. Osetkowski is by far the best post-up option for the Longhorns. But he is also the only member of the starting forwards who has demonstrated an ability to knock down the long ball. Freshman forward Mo Bamba, meanwhile, is shooting just 21 percent from behind the arc.

As a result, Osetkowski is effectively unable to play with his back to the basket when sharing the floor with Bamba and freshman forward Jericho Sims. When Sims isn’t in the game, Osetkowski is free to command the entire lane, and several times in the second half the fans saw him do just that.

Osetkowski has some perimeter skills, but spot-ups aren’t his game. Smart has limited his effectiveness in both areas by having Osetkowski do too much.

Bamba is every bit as good as advertised

It took a few months for the freshman phenom to get settled, but the results have been awe-inspiring.

Midway through the first half, Bamba caught the ball at the elbow and proceeded to reserve his spot on every top-10 highlight reel in the country. With the grace of a much smaller player, Bamba blew past his man and shook the rim with a monster one-handed windmill dunk. A possession later, the forward finished a reverse alley-oop to add to the Longhorns’ lead.

“We knew we had an advantage inside,” Osetkowski said. “So playing inside-out like that gave us great looks when they came to double. We want to play inside like that every game.”

After the game, Texas Tech head coach Chris Beard joked that Bamba “could block the sun and the moon.” The forward finished with five blocks to go along with 15 points and 11 rebounds. He’s the anchor who allows the aggressive Texas defense to thrive.

The Longhorns made it clear early in the season that this was not a team of shooters. The forward-heavy talent and slashing guards led to a number of forgettable performances from behind the arc in the opening months.

But Smart assured fans the team would get better — and they have. Texas has started to take fewer threes as a whole, using the long ball sparingly instead of as a centerpiece to the offense. The result has been smarter shots and higher percentages across the board. Against Oklahoma State, Texas shot 45 percent from behind the arc prior to the second-half collapse. On Wednesday night against Texas Tech, the Longhorns connected on 40 percent of their attempts.

The change has done wonders to smooth out the Texas offense, allowing the playmaking guards to play their brand of basketball.

On Wednesday, Texas took a game that was ready to be put away and gave the Red Raiders a glimpse of daylight.

Texas Tech took full advantage of a five-minute span midway through the second half to cut a 13-point Longhorn lead to five. Texas players gave up easy turnovers at the top of the key, failed to get back in transition and generally displayed the same low-energy stretch that has become routine in Big 12 contests thus far.

The same lack of urgency cost the team a 12-point lead against Oklahoma State. On Wednesday, Texas was able to rally for the win, but cold shooting from the Red Raiders played a big hand in that.

Better opponents will jump on the opportunity if Texas continues to provide one.