Coffee, fries and donuts shops coming to the Drag this spring 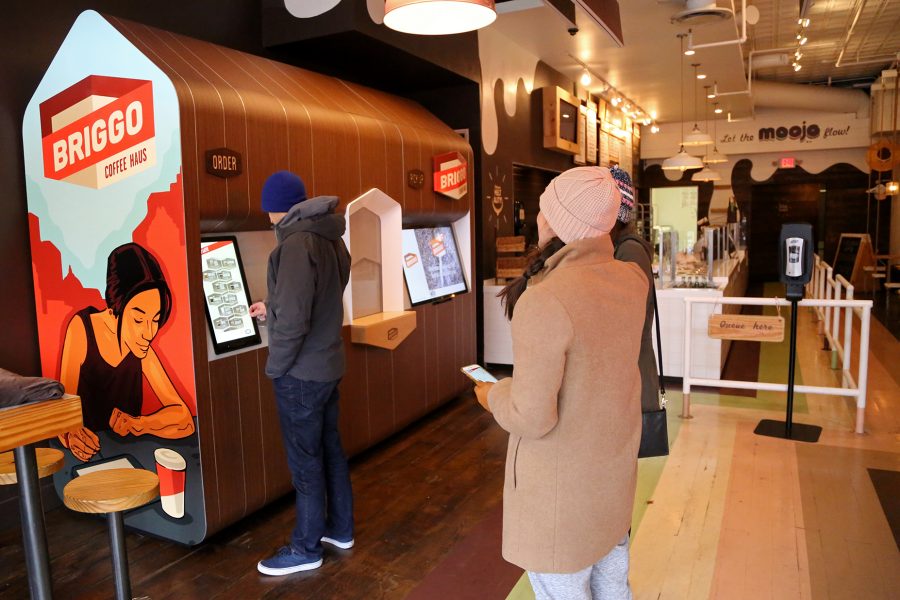 From a coffee robot straight out of a futuristic film to a chain that offers six different french fry varieties, new eateries will be available for students to choose from this semester on Guadalupe Street.

First to open was Briggo Coffee Haus, an automated coffee shop that uses a robot to serve up specialty coffee. The Austin startup opened in 2011 inside the Flawn Academic Center and closed in 2014. It returned to the area on Tuesday, now located within Moojo’s Ice Cream.

“The ability to give you control of the experience … really allows us to differentiate ourselves from a typical coffee experience,” said Kevin Nater, Briggo co-founder and CEO.

Nater said the startup aims to provide “connected coffee” by allowing customers to order coffee ahead through it’s free app and choose from various customizations such as flavors, temperature and number of shots.

Upon its return, the Briggo location became the first that is fully accessible to the public. Nater said students can expect a few differences this time around.

”Relative to the last time we were here, it is faster,” Nater said. “It holds more capacity and we’ve increased the functionality of the app to make the customer experience that much more connected.”

Briggo opened to a chilly Austin on Tuesday, drawing students such as nursing sophomore Ashley Irion in for a free, warm coffee.

“The (robot) is a good idea and saves a lot of time,” Irion said. “It’s really efficient and you don’t have to wait in line.”

French fry lovers have something to look forward to this spring as well, as the gourmet fry chain #getfried comes to Dobie Mall.

The fry-centered spot will feature six fry varieties and 15 sauces and seasonings for students to choose from. Chris Covelli, founder and managing partner of #getfried, said the idea was inspired by a trip to the Netherlands, where he saw fries sold in paper cones with dipping sauce.

“A light bulb kind of went off and I said, ‘There’s an opportunity here in the United States,’” Covelli said. “We really didn’t have a place that was doing that — loaded fries and a number of other french fry options.”

Since getting their start in Buffalo, New York, in 2015, the chain has opened four other locations.

“The more we learned about Austin being a ‘foodie’ town, a very eclectic town, it really matched up with the energy of our brand,” Covelli said.

Covelli said if everything goes smoothly, #getfried will open in the next two weeks. He said the chain’s best-selling, hand-cut fries are what will differentiate it from other fry options on campus.

“In my opinion it’s really hard to find a crispy, quality hand-cut fry,” Covelli said. “That’s our go-to fry and we pride ourselves in saying we have the best fries around.”

Rise co-owner Shashin Desai is still working with the city, but he said if everything goes smoothly, the store plans to open in March or April.

“That’s the rough time frame that we are looking at right now,” Desai said. “We are keeping our fingers crossed.”