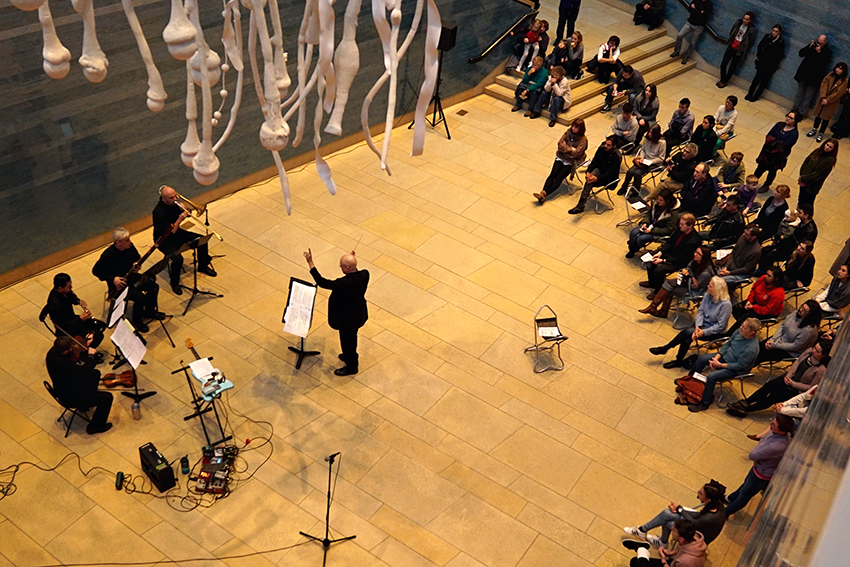 Nathan Felix might not be a household name, but three up-and-coming composers are probably glad they know it.

Felix brought three composers to Austin as part of his program, Keep Composers Weird, to perform at the Blanton Museum of Art’s monthly Beat the Rush concert series. A 36-year-old expat of the world of punk music, Felix is currently a Lone Star Emmy-nominated classical music composer.

“Growing up in Austin, I was always trying to connect with classical music, and I just couldn’t find enough of it,” Felix said. “There’s a lot of really cool classical music going on here, but I thought there was enough room to add something. You know … it wasn’t an oversaturated market.”

As part of the Keep Composers Weird program, three select composers are given the opportunity by Felix to perform and record an original composition, as well as network with Austin musicians.

Brent Baldwin, curator of Beat the Rush, is a friend of Felix’s and conducted all three Keep Composers Weird pieces, which were performed by an ensemble of musicians inside the museum. The two made similar journeys from the punk world to the classical scene.

“He actually did (Keep Composers Weird) as a house concert at his house up north,” Baldwin said. “And it was just really amazing … packed event. (I said … this) shouldn’t be a one time thing. This should be an organization.”

Felix says he originally got the idea while participating in a residency in Bulgaria.

“I was satisfied with it because I was in Bulgaria and it was a great way just to do something new,” Felix said. “But I thought, man, I can do this concept way better in Austin because I grew up here. So I was like, ‘I can really help composers to where they can actually create a network.’”

Kyle Henkel’s piece “Spectrum” opened the set. Henkel said he discovered Keep Composers Weird through a website called The Composer’s Site, a sort of “Craigslist for composers.” While he said he’s looking forward to going into the studio to make a polished copy of his song, he often prefers music in a concert atmosphere.

“It’s like watching a football game,” Henkel said. “The quieter and more intense the audience is, the more you want to focus on it.”