Texas aims for follow-up win at No. 6 West Virginia 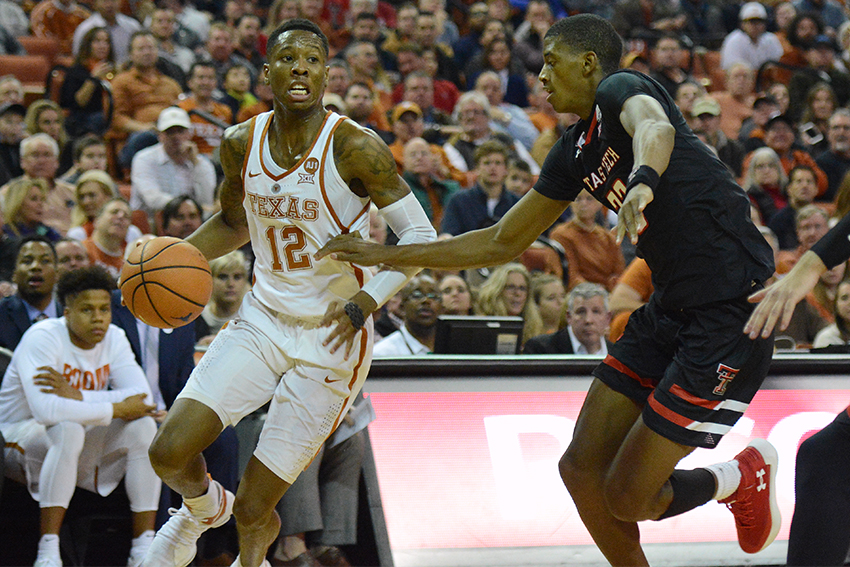 “(The Texas Tech) win was big because we lost some top-25 games earlier this year — Duke, Gonzaga, Kansas,” Texas head coach Shaka Smart said. “We’ve talked about doing a better job of protecting our home floor, and I thought the guys have taken that to heart.”

But Texas must now earn a convincing victory away from the Frank Erwin Center.

For West Virginia, the primary focus will be recovering from a two-game losing skid. The Mountaineers dropped their season opener to Texas A&M but collected 15 consecutive victories and rose as high as No. 2 in the country. But two straight conference losses to Texas Tech and Kansas recently brought head coach Bob Huggins’ crew back to earth.

The Mountaineers’ defense is powered by Jevon Carter. The senior guard was rewarded with both the Big 12 and the NABC defensive player of the year awards after a standout campaign in 2016-17.

And he’s only getting better.

Carter’s steals-per-game average has skyrocketed from a stellar 2.5 last season to a monstrous 3.4. He leads West Virginia in scoring with a career-high of 16.7 points per game. The star Illinois native dropped 42 combined points in his last two outings, and he’ll look to continue his scoring touch and get the Mountaineers back in the win column on Saturday.

Texas’ counter for Carter will likely be junior guard Kerwin Roach II. In his first game back from a fractured left hand, the junior thrived on both sides of the ball in the Wednesday night upset win over the Red Raiders. Roach added 20 points, drove effectively to the basket and stifled Texas Tech’s offense by limiting the team’s point guard and leading scorer Keenan Evans to just 11 points. Roach proclaimed at the beginning of the season that his goal was to become the national defensive player of the year — the same award bestowed to Carter last spring.

The Longhorns’ frontcourt pair of junior Dylan Osetkowski and freshman Mo Bamba is one of the best in the Big 12, if not the nation. The formidable duo played lights-out against Texas Tech, combining for 27 points and 16 rebounds.

Down low, West Virginia recently debuted junior forward Esa Ahmad, who served a 16-game suspension to start the season. In a small sample size of two performances this season, Ahmad has totaled 33 points and 11 rebounds. It will be Ahmad’s athleticism pitted against Osetkowski’s power and Bamba’s length in the paint.

The Big 12 battle at the WVU Coliseum tips off on Saturday at 1 p.m. CST. As in every conference game, the stakes are high. Texas hopes to gain momentum and enter the rankings on its late-season tournament push, while West Virginia must make up for its recent woes to retain a top-10 ranking.