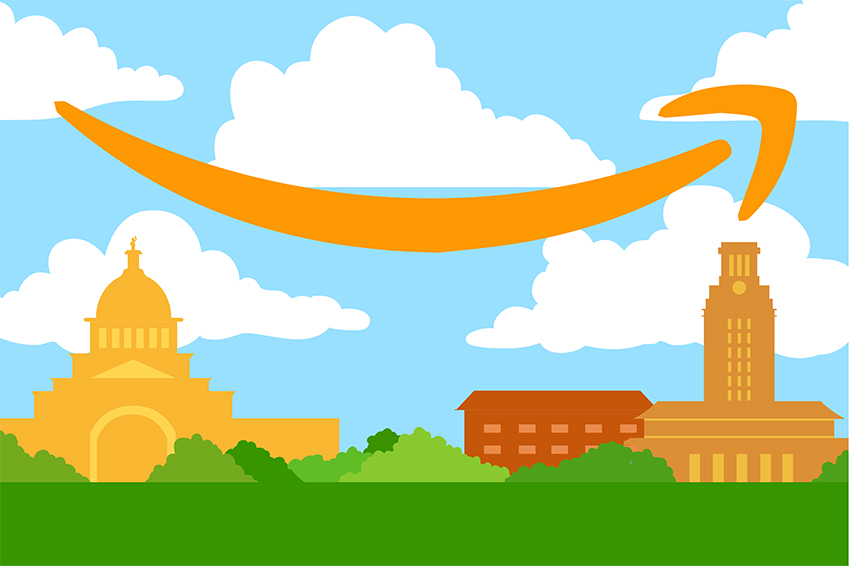 Austin has been named one of the 20 cities that still has a shot at nabbing Amazon’s second headquarters, according to a statement released by the company last Thursday.

Many of the 238 cities and municipalities that submitted a bid promised large tax breaks and other economic incentives to lure Amazon, but the Austin Chamber of Commerce has remained quiet about its proposal.

At a press conference, Mayor Steve Adler said he hadn’t heard any conversations about offering incentives but promised to keep in mind the potential consequences of development.

“The City Council has taken action to focus all of our economic development conversation around the city’s greatest challenges and needs, and for us that’s mobility and affordability,” Adler said. “That’s the lens that we’re going to use.”

Amazon HQ2, as it was dubbed by CEO Jeff Bezos, promises to bring “as many as 50,000 high-paying jobs” and $5 billion in construction to the region it decides on, not including an influx of jobs and construction money from additional investments in the community, according to a press release on the company’s website.

Marketing administration lecturer Ben Bentzin estimated a total employment boost as high as 250,000 jobs and said Amazon could potentially be the No. 1 employer in the Austin area.

“It would be a tremendous economic stimulus for the region,” Bentzin said. “It’s not just the 50,000 jobs it might bring here directly, but it also drags along with it suppliers and vendors and other companies.”

Even faced with the prospect of stiff competition — the shortlist includes heavyweights such as Boston and Chicago — Bentzin said he is confident in Austin’s ability to attract the retail giant, citing UT and a vibrant tech community as major assets.

“They want to put their HQ2 in a city where it will be easy to attract people,” Bentzin said. “I will tell you, having hired people in Austin for decades, it’s not difficult at all to recruit great people in Austin and to keep them here because of our lifestyle.”

Marketing administration professor Raji Srinivasan said naming these 20 candidates is not the last step in the process of naming a final winner.

“They’ll probably go to another shortlist,” Srinivasan said. “I don’t know what happens next, but I imagine that this list is too long to move to one city from here. Is Austin likely to make it to the next level? I think yes, then I’d like to see who’s on that list.”

Srinivasan said Amazon used a novel approach in publicizing the process of inviting bids from cities.

“They’re in a very interesting position here,” Srinivasan said. “The U.S. has lost a lot of jobs, so job creation is a big priority for any state and the U.S. government, and now Amazon is coming and saying, ‘We’re gonna give you 50,000 jobs and these jobs are going to be good jobs, well-paying.’ Amazon has a lot to offer, and I think they’re also using this as a mechanism to generate some positive energy, positive reputation for themselves.”