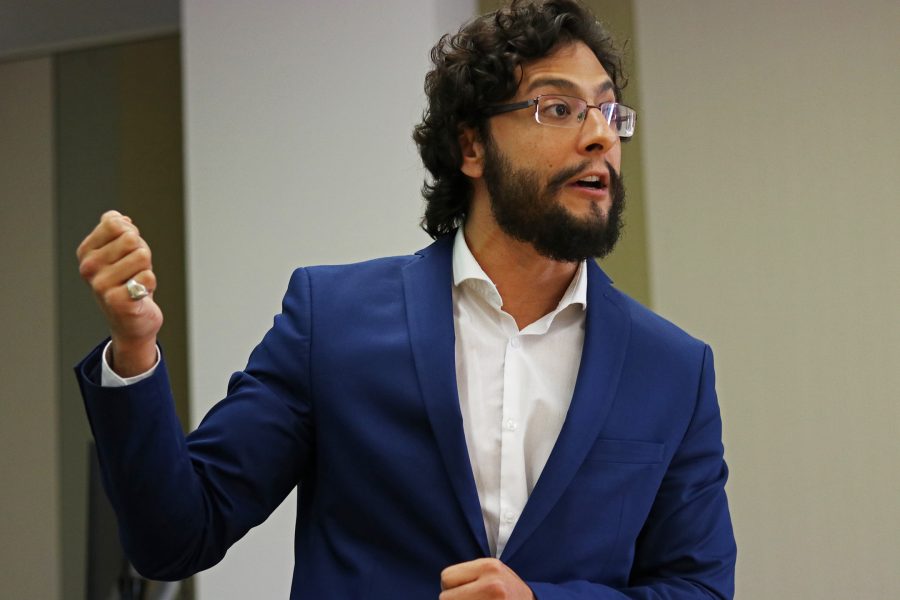 To most, the inscription “May God Be Mindful of Yazid the King” might sound like perplexing jargon, but students from the Department of Middle Eastern Studies attended a presentation on Monday to hear about the phrase, found on an ancient artifact from northeastern Jordan.

Ahmad Al-Jallad, an expert in Arabic and North Arabian history, discussed the origins of several Arabic linguistic characteristics and said the language did not develop linearly, but was developed through various influences.

About 30 students poured into the Liberal Arts Building to learn more about anthropogenic topics concerning Saudi Arabia, such as its culture, artifacts and linguistics.

Economics senior Ahmed Rehman said he was already familiar with Christian Arabic culture and knew of Yazid, but was interested in hearing a more in-depth perspective
on the topic.

“I’m really interested in Shia studies and seeing this quote is a really big deal,” Rehman said. “The lecture was very mindful and intriguing, and I’m super glad I got to attend.”

Al-Jallad is a lecturer at the Leiden University in the Netherlands and is currently working on a book about the history of the Arabic language. He wrote the first grammar of Safaitic, compiling ancient North Arabian inscriptions from Jordan and Syria. A second edition, defining more than 1400 entries, will be released this year.

Na’ama Pat-El, Middle Eastern studies department chair, said Al-Jallad’s findings are interesting and the department was excited to host him at the lecture.

“We’re hoping that Ahmad can make our department an empire and bring more awareness towards Middle Eastern studies,” Pat-El said. “I believe his research to be groundbreaking and hope people will think the same.”

Graduate student Hassan Abid said he doesn’t typically attend these lectures, but was drawn to this Al-Jallad’s lecture by the unique subject matter.

“I found the topic to be really interesting, so I thought I’d stop by and have a look at the presentation,” Abid said.

Following Al-Jallad’s lecture, the audience asked questions and engaged in discussion over the provided lunch.