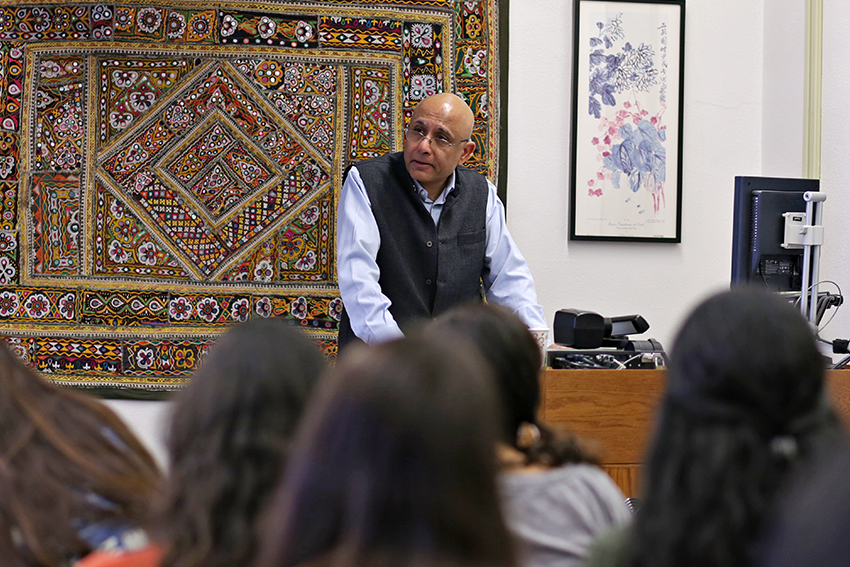 Senior lecturer Jishnu Shankar evaluated the writings of Baba Kinaram, a 17th century saint, social reformer and poet, to an audience of nearly 40 individuals at the Will C. Hogg Building on Monday.

In the lecture, Shankar examined Kinaram’s poetry pieces “Viveksar” and “Gitavali,” specifically regarding the social and political context of the works.

“I will be analyzing or looking at, in some detail, only two of them because in one hour you really cannot do much justice to all the literature he has produced,” Shankar said.

Aside from publishing multiple writings, Kinaram was believed to be an incarnation of the Hindu deity Shiva, established eight monasteries and founded the Baba Kinaram Sthal, a spiritual center and pilgrimage headquarters.

“It is important for people to know about this saint because he represents a fascinating personality, especially in terms of the syncretism that he displays in his literature,” Shankar said. “He is regarded as one of the treasures of Banaras.”

Despite his accomplishments and popularity in the Indian city of Banaras, Kinaram remained relatively unknown in Hindu literature and has not been studied extensively by scholars, which is one reason Shankar said he was glad to lead the event.

“I’m pretty sure not too many people outside of this Meyerson Conference Room have heard of the name Baba Kinaram,” Shankar said. “It is just a little bit puzzling that Hindu literature has ignored the contributions of a person of distinction.”

Business freshman Sidharth Bhat said he appreciated the opportunity to learn about a figure as obscure as Kinaram.

“The talk was really captivating because (Shankar) took a relatively unknown person of significance and opened our eyes as to how his work was poetic but so meaningful,” Bhat said.

“I teach modern Chinese literature, but I have always been interested as to how scholars in other fields understand, read and interpret literature,” Tsai said.

Shankar has been a senior lecturer at UT for 11 years and teaches Hindi classes such as Style and Register in Hindi.

“I feel so fortunate that he is in the same community as I am,” said Syed Akbar Hyder, Department of Asian Studies associate professor. “We have all been part of the Hindi Urdu flagship community.”

The event was hosted by the Department of Asian Studies, which will be hosting other guest speakers throughout the semester.