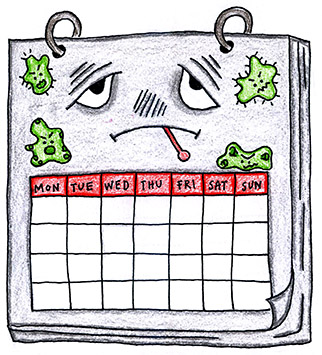 Although fevers and runny noses are often associated with colder weather, a study by UT researchers found why pandemics often emerge during the spring and summer.

A flu pandemic is defined as a global outbreak of the influenza virus. Although scientists have traditionally seen pandemics as random and difficult to predict, Spencer Fox, the lead author of the study said his team noticed trends across several major flu pandemics and became interested in predicting the emergence of these outbreaks.

“We became interested in it because we looked back at the most recent six pandemics going back to 1889, and what we saw was that every single one of them had emerged in the Northern hemisphere in the spring and summer months,” Fox said. “The consistency of that (pattern) made us interested and develop a hypothesis.”

Based on past flu surveillance data, the researchers developed a computational model to analyze the seasonal and pandemic occurrences of flu.

“We ran thousands of simulations (on our model) to have seasonal epidemics occur and introduce pandemics to see when (they) were most likely to occur,” Fox said.

Based on the simulations, the researchers found that flu pandemics were most likely to occur during the spring and summer months, which is toward the tail end of the seasonal flu period.

The onset and timing of the flu pandemic is affected by a brief period of heterosubtypic immunity. This type of immunity occurs when exposure to one strain of flu provides some protection from other flu strains, although the protection is usually not complete, according to Kathy Mosteller, director of nursing services at the University Health Services.

In particular, the heterosubtypic immunity that follows exposure to the seasonal flu can affect the timing of pandemic emergence.

“When seasonal epidemics come into a population, they immunize the population for a short period of time against new types of influenza,” Fox said. “So pandemics are not able to, or are less likely to, emerge when that immunity is in the population, but once that immunity is lost after 30 (or) 40 days, then pandemics are more likely to emerge. That creates a predictive window for spring-summer emergence of pandemics.”

The researchers’ work may also explain why pandemic severity has been underestimated by models in the past, such as with the 2009 H1N1 pandemic.

“We found that when a pandemic is emerging, if you don’t take into account the population structure of the community or the immunological characteristics (of the flu virus), you’re likely to underestimate the severity of the pandemic,” Fox said.

For example, early risk assessments of a pandemic that fail to account for the “leftover” immunity from the seasonal flu may predict too slow a rate of transmission.

“When you’re doing an early risk assessment of a pandemic, you’re looking at that early spread of the pandemic,” Fox said. “When that ‘leftover’ immunity is gone in the fall, it’s much more explosive. If you don’t take into account that immunity in that initial assessment, you’re going to underestimate the pandemic during that fall wave.”

The researchers’ work has important implications for future public health surveillance and predictive modeling for pandemics.

“Our paper shows that there is some predictability to pandemic emergence, which could help public health officials who are doing surveillance for pandemics to properly allocate their resources to risk times of the years,” Fox said.

Specifically, more accurate predictions regarding the timing of flu pandemics can help agencies such as the Centers for Disease Control and Prevention disseminate useful information to medical and public health professionals. This can improve health outcomes and reduce the spread of the virus, Mosteller said.

“H1N1 was the most recent (pandemic) I was involved in,” she said. “(After) they found that everyone was getting sick, even though they had the flu shot, they identified that it was this H1N1 virus. There was no protection in the vaccine for that, so they very quickly came out with a vaccine and supplied doctors’ offices everywhere with it.”