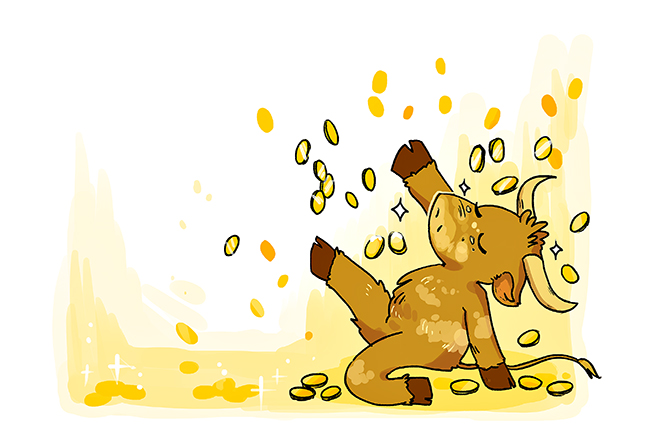 With the recent growth in popularity of cryptocurrencies, new coins pop up every day. Aside from popular coins such as Bitcoin and Ethereum, you can trade coins such as Dogecoin, Anti-Bitcoin, The Vegan Initiative and, soon, UT Coin.

UT Coin was first conceived on Jan. 13 as a satirical post on the Facebook page “UT LONGmemes for HORNSy teens” by computer science freshman Levi Villarreal. Villarreal announced he would make a UT-themed cryptocurrency upon receiving 1,000 reactions, and everyone who commented on the post would receive one UT Coin.

Since then, the post has received over four-thousand reactions, with more enthusiastic comments added almost daily. However, Villarreal said he planned on making a cryptocurrency regardless of the attention it received.

“Cryptocurrency is something that I’ve been wanting to get into for awhile just to see how it works,” Villarreal said. “I just put it out there just kind of for fun, but I knew I would follow through.”

According to Villarreal, making the coin isn’t the hard part. UT Coin is based off the Ethereum network, a cryptocurrency template that hosts many smaller coins. The hardest part of any coin’s rollout is the struggle for adoption and delivering on an ICO, or initial coin offering. Despite the difficulties, Villarreal is trying to deliver on his vow.

“I’m gonna try as hard as I can not to break the original promise of, ‘If you comment you’ll get one,’” Villarreal said. “I’m pretty confident we will be able to get it done.”

To pull off this feat, Villarreal said he asked for help from a few of his classmates. For example, he recruited computer science freshman Chinedu Enwere and tasked him with making a bot that will send messages to every commenter instructing them how to receive their coin. As of now, the bot is finished and undergoing tests.

“The adoption of (UT Coin), that’s the hard part,” Enwere said. “(The bot) looks alright, probably (has) some kinks and quirks there, but nothing that should be too hard to fix.”

Enwere said he hopes UT Coin can become something more than a part of the ongoing cryptocurrency fad.

“Maybe (we can) integrate it into the dining hall if we can get it up to that level. Everybody wants to be on the blockchain nowadays,” Enwere said. “(We’re) not trying to rush anything because it’s still in its infancy stage. You have to walk before you run.”

Villarreal and Enwere said they hope to have all coins delivered by Jan. 29, but time is of the essence due to a competing UT crypto solution. After seeing Villarreal’s post, math senior Ian Macalinao was inspired to do the same thing, creating his own cryptocurrency he dubbed Speedway Brick.

Macalinao said he started following cryptocurrencies in 2013. Since its sudden growth in popularity this past year, Macalinao said he has been trying to grow the Texas crypto-community through txcrypto.org, a chat group he made about three months ago. He encourages those interested in
cryptocurrency to join.

“I’ve wanted to get all the people in Texas interested in cryptocurrency talking about this thing,” Macalinao said. “The chat is really welcoming, and I’m happy to teach people trading development — anything related to cryptocurrency.”

For now, Macalinao said he sees Speedway Brick as a meme. He’s been able to give 15,000 bricks to 15 people, but he doesn’t see it being used for anything serious aside from sparking interest in cryptocurrencies.

Villarreal said though he takes his vow seriously, he views UT Coin in a similiar way that Macalinao sees Speedway Brick.