Atkins, Longhorns ready to battle with the Bears 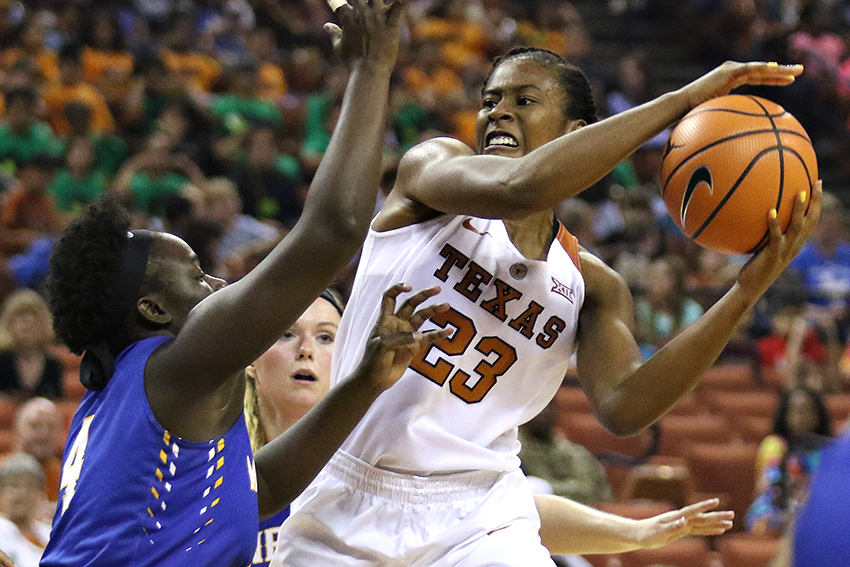 Ariel Atkins couldn’t get a shot to go down.

An invisible lid seemed to be on the rim for the then-junior guard as the No. 6 Longhorns hosted No. 4 Baylor on Feb. 20, 2017. Three-point shots rimmed out, mid-range jumpers refused to fall and open looks were a rarity.

Atkins shot 4-of-17 from the field as Texas fell to the Bears, 70-67. A 5-for-5 showing at the free throw line salvaged her night, bringing her point total to 14. Even then, the Duncanville, Texas, native knew her team had just let a statement win slip away.

“I don’t take satisfaction in losing,” Atkins said after the game. “Our team is better. I think the most important thing for me right now is to think about how much we’ve matured as a team, and that’s probably my focal point right now.”

Atkins has epitomized that growth in her senior year, emerging as the leader of the sixth-ranked Longhorns while averaging 14 points and 5.6 rebounds.

Now the senior has another shot at the No. 4 Bears as Texas heads to Waco on Thursday in a battle of two Big 12 powerhouses. For Atkins, the upcoming rematch is the only thing on her mind.

“I won’t remember that (previous performance), honestly,” Atkins said. “I’ll just go in with that mindset and stick to the game plan the coaches gave us.”

That game plan is simple — score a lot.

The Longhorns will need a strong showing out of Atkins as they take on a Baylor team that averages the second most points per game — 88.7 — in the country.

The key will be whether Atkins can find her range from behind the arc, where she’s drilled a team-high 24 threes this season at an impressive rate of 41.4 percent. It’s a feat few have managed to pull off against Baylor this season, though, as the Bears boast the nation’s lowest opponent field goal percentage at 30.2 percent.

“We have to score the ball,” Texas head coach Karen Aston said. “We have to design some plays to score just to stay in close range to them. Hopefully if we can keep it close we might have a chance to win.”

“The Big 12 championship basically goes through (Baylor),” Aston said. “We need to make up some ground if we can, so it’s a big game.”

The Bears are undefeated at home this season, but Texas is used to adversity. After playing the Bears, the Longhorns will have faced two top-five teams in the past 10 days. The first was a 75-71 loss to No. 1 UConn on Jan. 15 in Austin.

Thursday night’s game will push the Longhorns to their limit, but Atkins is up for the challenge.

“(Baylor) is an exciting team to play,” Atkins said. “It’s always good to play against really good competition. It’s a test of toughness.”