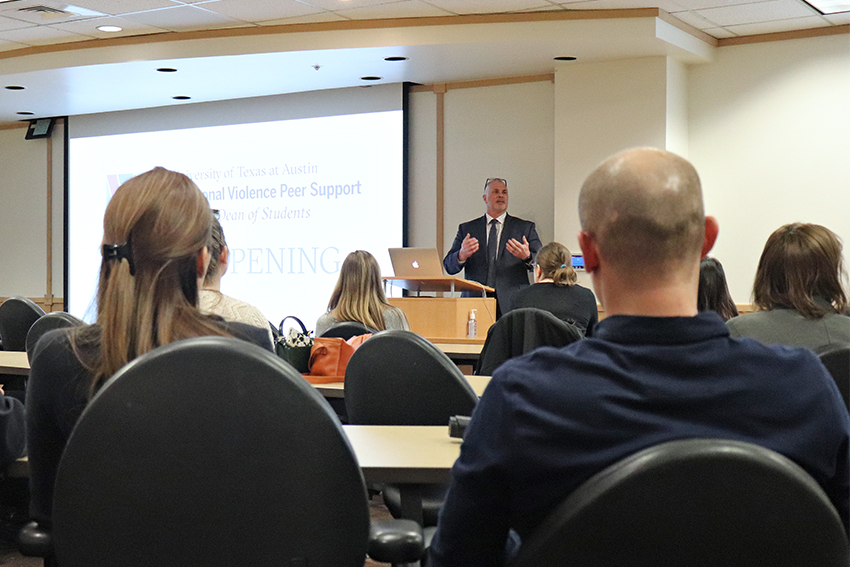 For survivors of trauma, especially those in attendance at universities with a number of student services like those offered at UT, the variety of resources can often distract from the process of healing or achieving justice. Add to this the intimidation of confiding in an administrator, and recovery can be stifled altogether.

On Wednesday evening, students and faculty gathered in the Student Services Building to commemorate the grand opening of Interpersonal Violence Peer Support, IVPS, a student-led program that offers free confidential peer support for students impacted by sexual assault, harassment and other kinds of interpersonal violence.

“I missed my first counseling appointment here because I was too afraid to press the elevator button,” said Mia Goldstein, IVPS student coordinator and Plan II and radio-television-film junior. “Peer support exists to make this easier … It exists to reduce the number of barriers that prevent students from getting the support they need.”

The idea of a peer-based support group was conceived one year ago when students banded together to petition for greater involvement in the support realm of interpersonal violence, where their efforts had previously been limited to prevention.

The program is managed by Student Emergency Services in partnership with the Title IX Office and Voices Against Violence at the Counseling and Mental Health Center.

“(Students can even) request to speak with (peer supporters) of the same grade or similar major,” Soucy said.

“It’s very scary to go to these administrators and teachers who have to report particular things, but maybe you don’t want to lose control of your narrative,” Mills said. “This allows you to talk to somebody who’s in the same situation as you and who will be able to better recognize your experience.”

Speaking to a crowd of attendees at the opening, Goldstein outlined her hopes for the program’s future.

“I believe IVPS has the potential to completely change the way we support survivors at UT,” Goldstein said. “It is my hope that IVPS eventually becomes a natural part of the student lexicon and anybody who has to deal with this issue will know where to go instantly.”