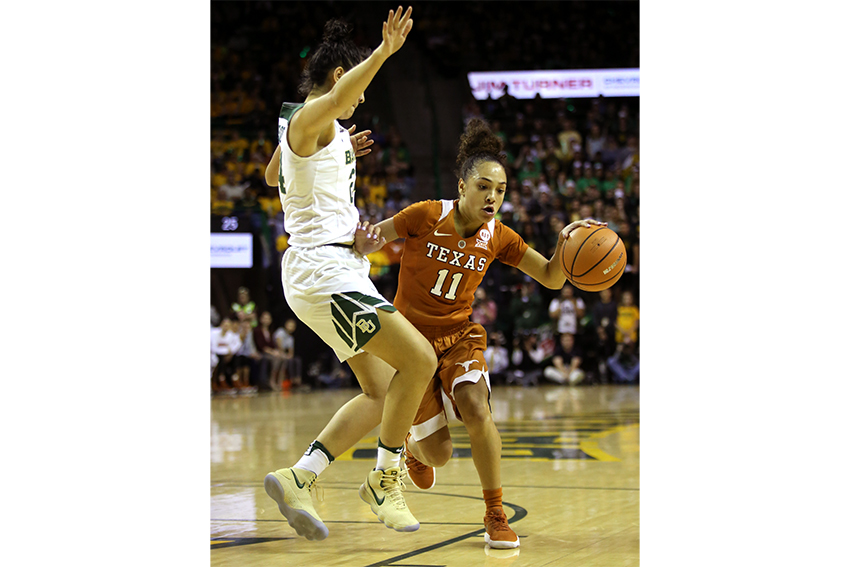 WACO, Texas — The No. 6 Longhorns entered Thursday night’s road game against No. 3 Baylor with hopes of a season-defining victory. Those hopes were shattered as Texas fell to the Bears in an 81-56 blowout. Here are five takeaways from the game.

The Longhorns walked into the Ferrell Center with their sights locked on Baylor forward Kalani Brown. The 6-foot-7-inch center has tortured defenses all season, averaging 21.7 points and crashing the boards for 9.3 rebounds per game.

But with Texas determined to contain Brown, Baylor forward Lauren Cox broke free. The sophomore made the Longhorns pay in the first quarter, going 3-for-3 from the field and sinking all five shots at the free throw line for 11 total points.

The Bears won the opening quarter in every way, out-rebounding, out-shooting and out-hustling the Longhorns to take a 28-18 lead at the break.

“I expected (Baylor) to be really passionate and energetic in the way that they played,” Texas head coach Karen Aston said. “But I’m surprised by our team’s lack of composure and competitiveness in the first quarter.”

Baylor shuts down McCarty in the first half

Senior guard Brooke McCarty is the engine for the Longhorns, and that engine couldn’t start in the first half.

The League City native found herself at the mercy of Baylor guard Kristy Wallace, unable to create penetration and get open looks for her team.

McCarty totaled just four points on 1-of-8 shooting at the half as the Bears laid into the Longhorns, outscoring them 22-9 to break the game wide open.

Texas shot 26.5 percent in the first half as the Bears entered halftime with a commanding 44-27 lead. The 17-point deficit marked the most the Longhorns had trailed all season.

Brown explodes in the third quarter

With the Longhorns still doozy from the first half, Brown hit her stride in the third quarter.

The 11th-highest scorer in the nation owned the paint, exploiting Texas’ defense for nine points on 4-of-8 shooting.

Brown got the undisputed victory in her highly anticipated matchup with junior forward Jatarie White, crashing the glass for four rebounds to White’s one in the third quarter.

Texas had no answer as the Bears cruised into the final quarter with a 64-42 lead.

Baylor doesn’t ease up in the fourth quarter

The Bears kept their foot on the gas in the fourth quarter, tallying four offensive boards and forcing four Texas turnovers.

Wallace continued to win the battle against McCarty, finishing with 27 points on the night, including nine in the fourth quarter alone.

“(Wallace) controlled the game from the jump,” Aston said. “She made a lot of plays for (Baylor) and had a big game.”

The Bears kept their starters in until the final buzzer sounded, securing a dominant 81-56 victory at home.

Frontcourt scoring proved fatal for the Longhorns as senior forward Audrey-Ann Caron-Goudreau and White combined for just 11 points. Three-point woes also plagued Texas as the Longhorns shot an abysmal 3-for-15 from behind the arc.

For a Texas team that fell just short to No. 1 UConn in a 75-71 heartbreaker on Jan. 15, Thursday’s blowout defeat is a step backward.

“It is frustrating when you don’t show up,” senior guard Ariel Atkins said. “They out-worked us, had more energy and played with passion. They were a team tonight, and we weren’t.”