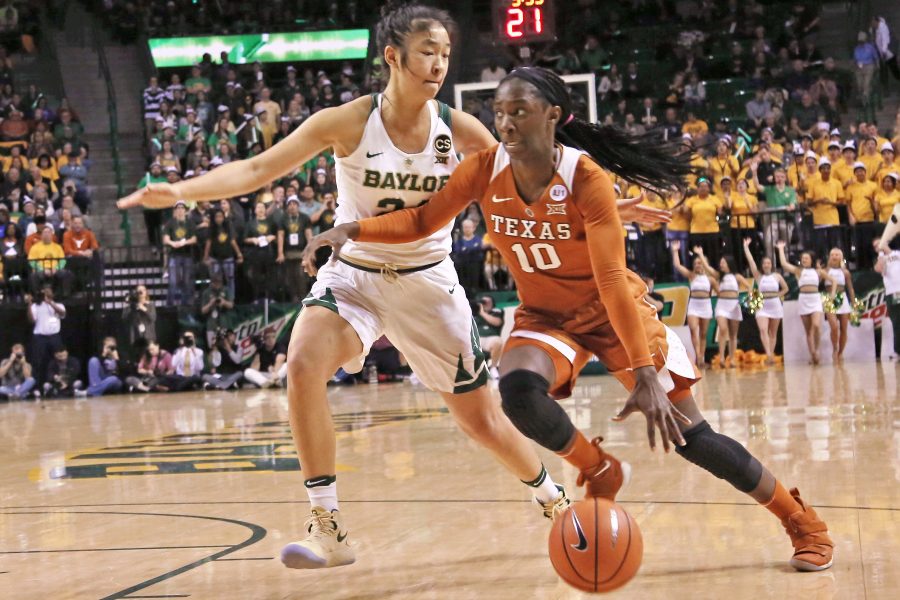 WACO, Texas — Three looks inside and zero points to show for it.

Late in the second quarter of No. 6 Texas’ 81-56 loss to No. 3 Baylor on Thursday night, sophomore guard Alecia Sutton received an inbound pass near the left block, a half-step in front of her defender. Another dribble would have given her a chance at a layup.

Instead, Sutton just glanced inside and dribbled back near the top of the key to reset the offense. She noticed junior forward Olamide Aborowa wide open on the opposite side of the lane and lobbed a pass.

Aborowa mishandled the catch. She pump-faked once, then pitched it to Jada Underwood in the middle of the floor. The sophomore wing hesitated, then tried for an up-and-under post move right before the shot clock ran out.

A thicket of long-limbed Bears loomed in the paint. The Longhorns couldn’t explode their way through it. They tried dancing around it instead, but never found the right rhythm. The ball rimmed out, completing a sequence that encapsulated Texas’ night.

“I didn’t think they played scared. I just didn’t think they matched Baylor’s passion,” Texas head coach Karen Aston said. “There’s been a couple of times this year when we haven’t done that. And this was by far our worst performance as far as simple things like competition.”

Baylor sophomore forward Lauren Cox collected the rebound and found freshman guard Alexis Morris on the outlet pass. Morris zoomed to the opposite end of the court and hit a mid-range jumper in transition, putting Baylor up 44-25 with 41 seconds left in the quarter.

Senior guard Brooke McCarty dripped in a buzzer-beating floater to end the half, but Texas was ultimately exiled to the perimeter. The Bears finished the game with seven blocks — including six from Cox alone — and out-rebounded the Longhorns, 50-34.

“I would say that their size and their length definitely makes it a little bit more difficult,” junior guard Lashann Higgs said. “But we’re just not competitive. They out-competed us. They were just tougher than us and were playing with a purpose.”

The Longhorns struggled just as much from outside. Texas launched plenty of open triples and jump shots, but the ball rarely found the bottom of the net. McCarty and fellow senior guard Ariel Atkins combined to shoot just 8-for-30 from the field and 3-for-10 from three for 27 points.

Atkins’ composure suffered. Once the game slipped away, she began setting the ball on the floor after every call against Texas rather than handing it to the referee. She committed seven of the team’s 16 turnovers.

“It is frustrating when you don’t show up,” Atkins said. “They out-worked us, had more energy, they played with passion. They were a team tonight and we weren’t.”

Still, Aston knew her team could have performed better.

“I was a little surprised — a lot surprised by the lack of composure and competitiveness,” Aston said. “It was just a little bit of an old-fashioned butt-kicking.”

The Longhorns can’t afford to dwell on the loss. The Big 12 doesn’t allow teams much time to rest between games, and Texas is no exception.

“You’ve just got to go on to the next thing and just get back into the gym,” Higgs said. “Baylor wanted it more, so we can’t dwell on it.”

Texas hosts Iowa State at the Frank Erwin Center on Saturday at 7 p.m.