Texas rights its wrongs against Iowa State, 87-55, in short turnaround 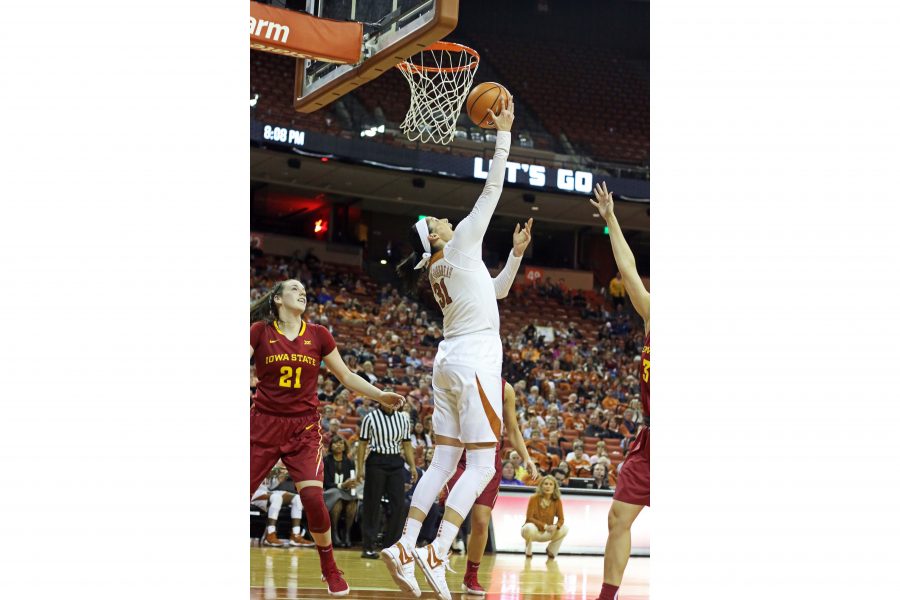 Audrey-Ann Caron-Goudreau walked into the Frank Erwin Center on Friday determined to figure out what went wrong.

The senior forward and her team were still licking their wounds from an 81-56 mauling at the hands of No. 3 Baylor on Thursday night — Texas’ worst loss since 2016.

Now the Longhorns faced a short turnaround as they were set to host Iowa State on Saturday at 7 p.m. But instead of drilling her team with a tough day of practice and yelling, head coach Karen Aston sent them to the film room.

What Caron-Goudreau saw was eye opening.

“(Our) energy and connectivity between players wasn’t there during the Baylor game,” Caron-Goudreau said. “But we didn’t have time to feel sorry for ourselves. We just had to go to sleep early and go back to work the next day.”

Caron-Goudreau walked into the Erwin Center on Saturday with one thing on her mind – beating Iowa State. That mindset translated into an 87-55 thrashing of the Cyclones on Saturday night — the largest win-margin for Texas in the history of the two teams’ series.

Iowa State came out with some intensity of its own to start, as senior guard Emily Durr torched the Longhorns for the first nine Cyclone points of the game.

With Texas scrambling for an answer, Ariel Atkins delivered. The senior guard countered by nailing a mid-range jumper and sinking a corner three as the Longhorns trailed, 12-11, with 3:08 left in the first quarter.

Texas followed Atkins’ lead, clawing its way to an 18-17 advantage at the break.

“Iowa State is hard to guard,” Aston said. “I thought that after the first quarter we did a pretty good job of adjusting.”

The Cyclones didn’t budge in the second quarter, battling the Longhorns to reclaim a 29-28 lead with 4:19 left before halftime.

Texas dug deep, calling sophomore forward Joyner Holmes off the bench for a source of offense in the paint. Holmes made the most of her seven minutes, exploding for six points and four rebounds in the quarter.

Iowa State had no answer for the Longhorns’ attack as Texas ended the quarter on an 11-1 run to take a 39-30 lead at the half.

“I think it was just about recognizing our matchups,” Holmes said. “They had some smalls on us, and so I just took advantage of the matchup and tried to score inside the paint.”

The Longhorns went for the knockout at the start of the third quarter, suffocating the Cyclones with a full-court press that resulted in three turnovers and a 14-0 Texas run.

Caron-Goudreau finally broke free, feasting off an Iowa State defense that looked feeble in the paint. The 6-foot-4 senior put on a clinic, scoring 10 points on 4-of-4 shooting as Texas took a commanding 66-44 lead into the fourth quarter.

“It was definitely different from the Baylor game,” Caron-Goudreau said. “I feel like we were able to pass it more to the post. It was just a different game.”

The fourth quarter saw no change as Texas placed the finishing touches on a dominant 32-point win. Atkins led the way with a team-high 15 points on an efficient 6-for-8 performance. Caron-Goudreau kept pace, posting 12 points to go with a pair of rebounds.

The victory gives Texas (16–4, 7–2 Big 12) some momentum as the Longhorns must now hit the road for a showdown against Kansas on Wednesday at 7 p.m.