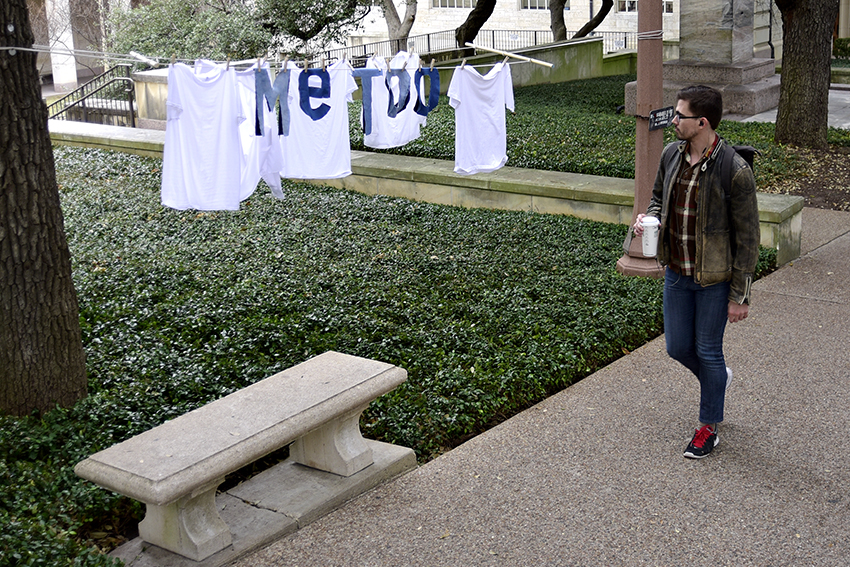 Students walking down the South Mall late Friday morning stopped and stared. But they weren’t marveling at Littlefield Fountain or the picturesque lawn dotted with students. They were focused on a clothesline strung up outside Batts Hall with white shirts and denim letters spelling “Me Too.”

The display, created by design junior Leo Martinez, was one of many projects that appeared around campus this past weekend as part of a typography assignment for the class, Design and Social Environment. Martinez was inspired by “Me Too,” a social movement aiming to end sexual violence. The movement went viral on social media in October 2017 and has since inspired celebrities and other people to speak out about their experiences with sexual assault and harassment.

“(The movement’s popularity is) the perfect segue to take it out of the internet and put in a real environment where people can actually exchange ideas (about) what they think about the topic, rather than just send tweets to each other,” Martinez said.

Conversations started by the “Me Too” movement’s popularity have led to arrests and job loss for perpetrators of sexual misconduct. Martinez said seeing justice carried out has made discussing the sensitive topic much easier for survivors.

“It gets people to be a little more confident, more vulnerable about their situation and able to express that,” Martinez said.

“You may feel free doing these things,” Kim said. “In the moment you may think there are no consequences, but once you do the drugs and get caught, it’s the polar opposite.”

Kim’s project was placed at West Mall on Friday evening. When he stopped by Saturday morning, he found it in the garbage.

“I was kind of angry, but my professor said, ‘You have to take pictures of the process, and whatever happens, happens,’” Kim said.

While other students chose to make a statement with their project, design senior Stephanie Collins said she wanted to raise a question: “Do people really pay attention?” Her display placed the onomatopoeia words “splosh,” “woosh” and “squeak” in grass, among tree branches and on a rickety door.

“What I hope is that people find a correlation between the word and the grass when they’re walking through it,” Collins said. “Maybe they’ll listen to it and think, ‘Is that really what it sounds like?’”

This assignment differed from most projects for design majors, which are often stretched out over a semester. Collins said this project challenged her to come up with a concept in a short amount of time and convey it with limited means.

“That’s a big part of being a design major,” Collins said. “There are so many things I want to do, but I just don’t have the budget, so I have to change my approach, which is fine. Design is really about problem-solving.”