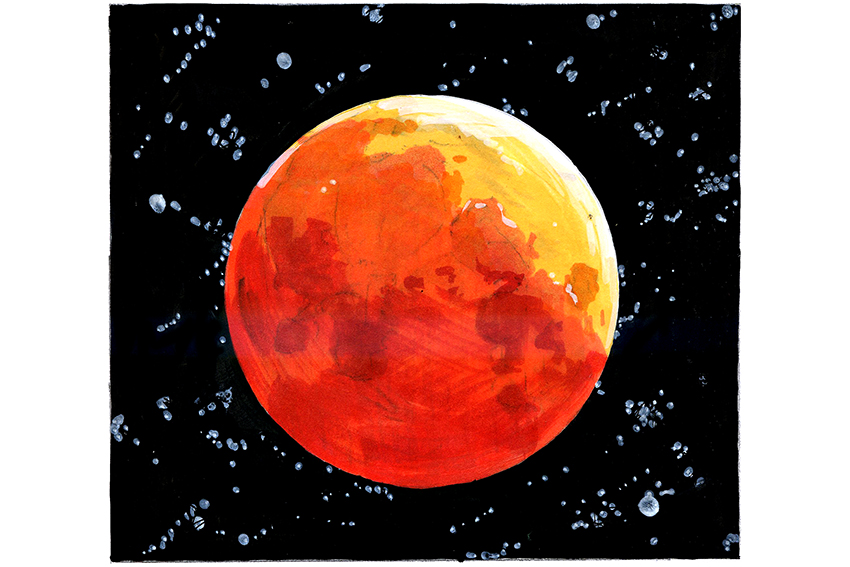 Six months after the Great American Solar Eclipse, the Texas skies will once again host an unusual astronomical event. On Jan. 31, a lunar eclipse will combine a blue moon, a blood moon and a supermoon, reaching maximal eclipse at around 7:20 a.m.

The combination of these three phenomena has been dubbed a “super blue blood moon,” and it is rare. The last one seen in the Americas was in 1866.

McDonald Observatory researcher Joel Green said while the super blue blood moon is a combination of three events, one of them is a “calendar trick” due to the moon phases.

“A blue moon just means when a full moon occurs twice in the same calendar month,” Green said. “Since the moon phases last only 29 days, you can sometimes have months with a full moon right at the beginning and end. Moon phases are caused by the angle of the sun on the moon with respect to our view from Earth. When the moon is full, that means the sun is illuminating the
close side.”

The next component, the blood moon, is related to the eclipse. The Earth passes between the sun and moon, temporarily blocking the sun’s light from hitting the moon. It can only happen during a full moon when the sun is directly behind the Earth.

“Much more interesting is the blood moon,” Green said. “When the Earth completely blocks the moon during an eclipse, it is entirely in our shadow. But because the Earth itself glows, the moon can still be seen, lit up by the red ‘dusk’ part of Earth’s atmosphere. So it’s like having a red night light in your room, making everything look dimly red. Then the Earth will move away and the blood moon effect will disappear as the eclipse continues.”

“The blue moon isn’t anything different happening astronomically, but it’s still cool to think of,” Finkelstein said. “We can get a total lunar eclipse only during the full moon time. You have to have the right alignment of the moon, the Earth and the sun.”

Finally, supermoons occur when the moon is near the closest point to Earth in its orbit, known as perigee. Green said the moon appears about 5 percent bigger than average at perigee, but this change is difficult to notice by eye. According to NASA, it will also be about 14 percent brighter than average.

“That’s been another coincidence,” Finkelstein said. “We’ve actually had three (supermoons) back to back. There was one in December, and now these two in January, where that perigee moment aligned with the full moon for three straight full moons.”

This combination hasn’t happened in America in over a century. However, there is a narrow margin to observe it. The moonset will occur shortly after the eclipse reaches totality.

Astronomy program coordinator Lara Eakins said attendees of Wednesday night’s star party, a weekly public telescope viewing hosted by the astronomy department, will be able to see the moon before the eclipse. However, since the eclipse will only be visible shortly before sunrise in Texas, there won’t be a special viewing.

To observe the super blue blood moon, the partial eclipse will begin at 5:48 a.m., with the total eclipse beginning at 6:51 a.m. and reaching its maximum at 7:20 a.m.

“Just make sure you have a clear view of the night sky where the moon is, and (you) aren’t very close to bright lights,” Green said.