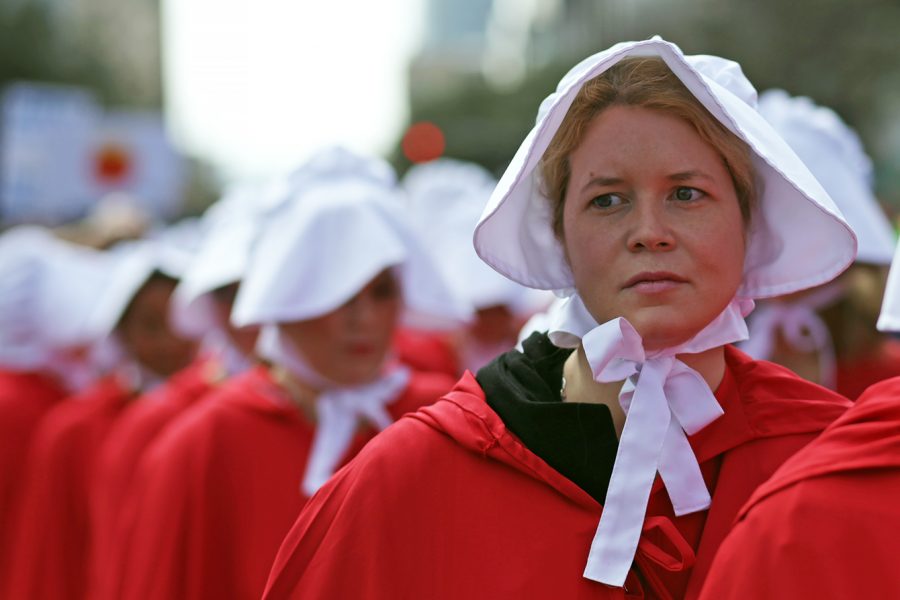 Dozens of women stand silent in front of the Capitol on Jan. 20, heads bowed, dressed in blood-red robes and stark white bonnets that shield most of their faces. The women do not carry any signs or explain why they are there — they let their presence do the talking.

The women in red are members of the Texas Handmaids, a group of activists who dress as characters from Margaret Atwood’s “The Handmaid’s Tale,” a dystopian novel in which women have little to no rights. The group gathers at legislative sessions and events in order to protest for women’s rights and reproductive health.

Jenny Redman, a member of the Texas Handmaids, said they chose the handmaids to be their symbol because of the characters’ recognizable and unignorable garb and for the challenges they face.

“I think the handmaids are a powerful visual reminder of the subjugation of women and the constraining of women’s freedom,” Redman said.

The Texas Handmaids made their first appearance during last summer’s special legislative session to protest the passing of bills such as SB8, an anti-abortion bill. Stephanie Martin, the head organizer for the group, described their protest style as vigil-esque, and said that they have gained lots of attention.

“I can’t tell you how it is to move through the halls of the state Capitol in the robe,” Martin said. “You change the temperature in the room when you walk in, and as a feminist you feel so often your voice is not heard.”

Since making their first appearance in July, the group continues to make waves all around Austin, gain national press and inspire women across the world to don the red robe.

“It’s wonderful to finally get people like yourself and people around the world grabbing onto this iconography,” Martin said. “It’s really holding up a mirror to what they’re doing with our reproductive freedom.”

Martin also noted that since the legislative sessions ended, they’ve decided to take on a more proactive role.

“During the legislative session, we were protesting what was happening and what we knew would ultimately pass,” Martin said. “We were in kind of a reactive defensive mode. We have had a year off to build and move forward and we’re charging ahead. We’re not playing defense anymore. We’re on the offense.”

Nichole Miller, one of the five Texas Handmaids’ organizers, echoed Martin’s statement, explaining that the group needs to do more than just protest. Since November, the handmaids have been working to get donors to back out of crisis pregnancy centers, which Miller said are non-medical clinics that try to dissuade pregnant women from seeking an abortion.

“Because we are a protest group, we want our actions and protests to mean something,” Miller said. “We can stand out and be vocal, but at the same time, what are we doing? We gotta have action.”

Miller expressed her belief that there is no end in sight for the Texas Handmaids. After attending the Texas Rally for Life this past weekend, Miller said they are even more prepared to continue their mission for a pro-choice Texas.

“We’re not gonna give up,” Miller said. “There’s gonna be no stopping. Greg Abbott’s speech over the weekend was basically saying that Texas was going to be the most pro-life state and that’s just not gonna happen, not with the Texas Handmaids. We’re not gonna let that happen. We’re gonna keep choice at the front of legislation.”