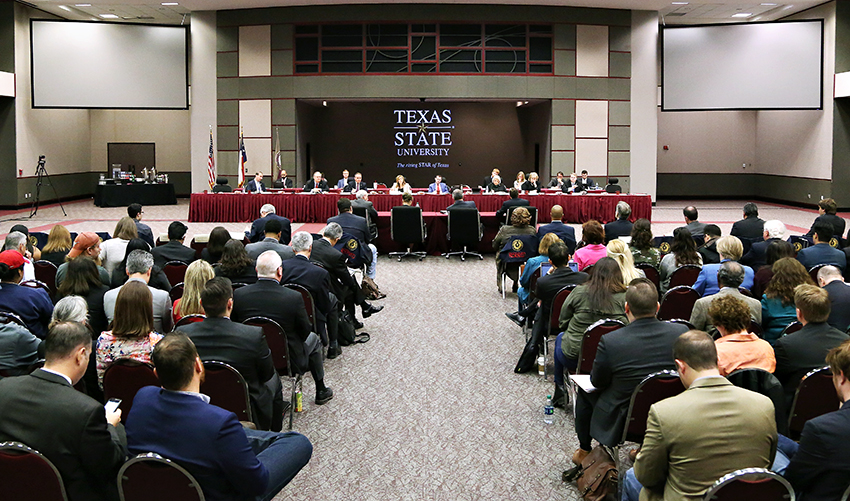 The men were quickly escorted off campus, but the incident joined others across the state. As the conversation around free speech on college campuses has grown, Dan Sharphorn, UT System vice chancellor and five other representatives from Texas schools convened at a Texas Senate Committee on State Affairs meeting Wednesday to compare and contrast policies and possible improvements.

“One of the changes that UT-Austin made recently was to update the list of items that were prohibited at protests,” Sharphorn said. “(This includes) sticks, poles, clubs, helmets, body armor, open flames and masks that may obstruct law enforcement.”

“The first thing that’s paramount is the safety and security for all involved,” said Raphael Moffett, vice president of student affairs at TSU. “With that instance in particular, it did not go the way that it should have gone.”

TSU, like UT, requires advance notice for an individual not affiliated with the University to speak. In this case, the event was not booked properly, which led to the state legislator’s last minute cancellation.

“It wasn’t a decision that was made lightly, but we are convinced that it was the right decision,” said Ray Bonilla, Texas A&M System general counsel. “We know that popular and welcome speech does not need protection, but unpopular, repugnant speech requires protection. We stand ready to fulfill that duty, but our first duty will always be to ensure the safety of our campus.”

Looking ahead, Sharphorn said the biggest issue at UT lies not necessarily with changing free speech guidelines, but with making sure what is already implemented is well known by the community.

Charlie Bonner, chair of the Governmental Affairs Committee at UT, said Student Government is in the process of forming a civic advisory committee to bring together different political voices on campus.

“This is something that people are experiencing differently because of their political views,” said Bonner, a Plan II and government senior. “We want to make sure we are giving the full story to represent all students, their safety and their speech.”

Historically, Bonner said college campuses are regarded as havens of free speech, and it’s up to the University to uphold that.

“Universities have this role in our national conversation of protecting free speech, they always have,” Bonner said. “As our politics get more divisive, this becomes a more difficult principle to navigate. We need to look at what we’re doing and make sure that we are protecting students and protecting their rights as things become more heated.”