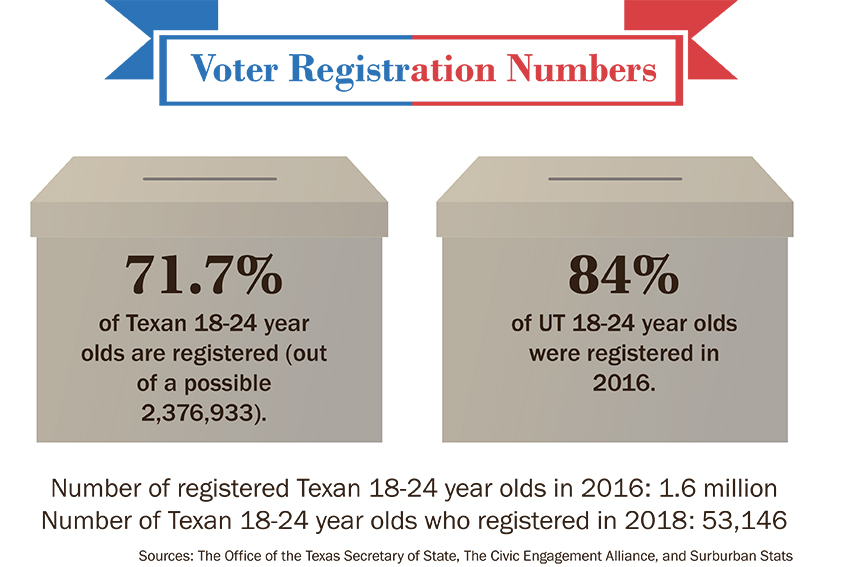 Presidential elections may generate the most buzz, but for some, the primaries for midterm elections are just as important.

Voter registration for the March 6 primaries ends today at midnight. The primaries will determine candidates for state legislature offices as well as the Republican and Democratic candidates for the gubernatorial election in November.

Last fall, UT was voted the most improved university for voter turnout, a trend Marco Guajardo, the civic engagement alliance chair, said he hopes will continue this year during the primaries and midterm elections. The CEA is a nonpartisan UT organization aimed at increasing voter engagement on campus.

“Not everyone is expected to be the most informed voter,” marketing sophomore Guajardo said. “But these are serious elections with serious consequences, and if you’re a concerned student you have to voice your displeasure or your satisfaction, either one.”

According to the Office of the Texas Secretary of State, over 1.7 million 18–24 year olds were registered to vote in Texas as of last Friday. More than 53,000 of those voters were newly registered this year. That number is expected to be much higher after registration closes today.

“Local government’s not all that sexy but the decisions they make impact us so much more,” Elfant said. “I always say (young voters) have the most at stake in the decisions that are going to be made by state and local government. These decisions are going to impact people’s ability to get a good education, get a job, be able to afford housing … they change people’s lives, but unfortunately those elections have lower turnout.”

Students might not vote for a multitude of reasons, but they are often disappointed in or resentful of current policies, Guajardo said. He also identified apathy as one of the biggest deterrents to registration and voting.

“Getting students to vote doesn’t always work, and it can be difficult,” Guajardo said. “But a lot of times we can turn apathetic students into regular voters.”

Abigail Horne, a Plan II and studio art freshman, said she decided not to register because she wants to be fully informed when she votes in local elections.

“If I end up voting, I don’t want it to be a spur-of-the-moment kind of thing,” Horne said. “I want to be able to vote and know why I voted, so until I have enough time to really put in enough effort to be satisfied with my vote, I don’t want to register. I feel like that’s a big responsibility and I’m not going to just throw it away.”

Ed Espinoza, executive director of Progress Texas, an organization aimed at promoting leftist policies, said the student vote could potentially cause major changes if they showed up in full force at the midterm elections in November.

“Millennials and Generation X alone have the power to flip Texas,” Espinoza said. “We tell people, ‘Hey man, if you don’t like what you see on the news you have the power to change it,’ and the way you do that is by voting.”