Ruby’s BBQ to close after 29 years 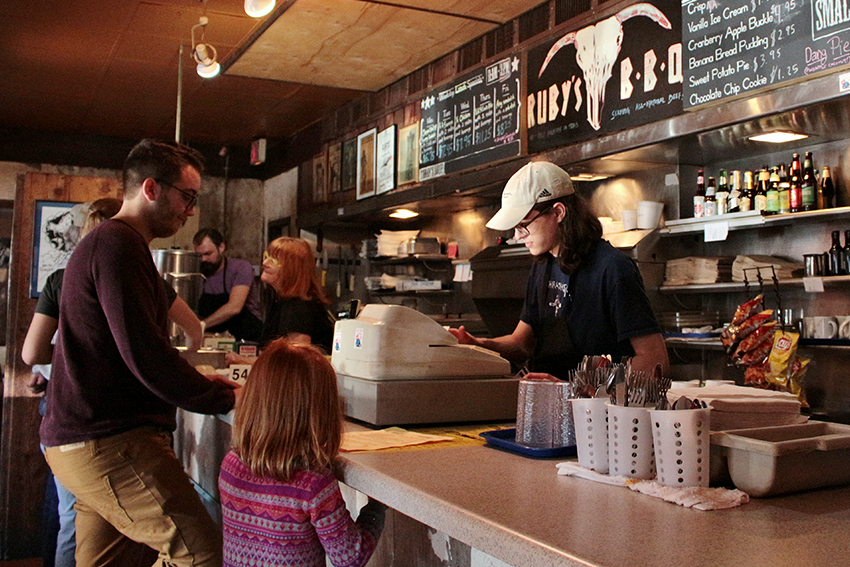 To UT alumnus Jon Schy, Ruby’s BBQ means memories, quality brisket and above all, consistency. After nearly 30 years on Guadalupe Street, the campus-area barbecue joint will close its doors later this month.

“That’s one thing that is really sad about it going away, is that it was very similar to what it is now,” Schy said. “The food, the ambiance, it was always no-nonsense — you go in there and it’s people who like to eat.”

Ruby’s opened in 1988 to a rising Austin food scene and gained attention for its casual atmosphere and slow-cooked meats. The location was right by Austin’s iconic Antone’s Blues Club, which has since moved, and provided a place for concert-goers to chow down.

“It really was a great place to go,” Schy said. “It was like a time machine. You could just go there (after you graduated) and it would be like you were back in college.”

Ruby’s is still serving the classic dishes that started its success. Owner Pat Mares was behind the restaurant’s fresh made sauce, meats and sides, which included hot beans, homestyle fries and macaroni.

Avery Callaway, an employee of 10 months and lifelong visitor of Ruby’s, said Mares’ decision to close was not made lightly.

“You have increased food prices, you have increased rent, and you have less customers than you used to have,” Callaway said. “At this point, it’s been open for 29 years, and I think Pat worked really hard. I think that she deserves a break and that’s what she’s going to do.”

Callaway said the store will be remembered for its brisket, which is smoked for 20 hours until tender. His personal favorite menu item is the chopped beef, which includes brisket trimmings and beef sausage marinated overnight in homesauce.

“I’ve been coming here since I was a kid,” Callaway said. “It’s really good food, (and) it’s a really good atmosphere. Customers come here and they want to feel like they are getting a home cooked meal from people they know, and that’s the sort of experience we try to give them.”

Ruby’s was packed with customers Saturday evening, including government and history senior Zach Dwyer, who stopped in to try the food before it closed. Dwyer, who described himself as a big barbecue fan, opted for brisket, beans and potato salad.

“I live right around the corner, and I’ve just never been here, so I was like, ‘I should give it a shot’,” Dwyer said. “It’s always kind of sad to see a business close.”

Ruby’s will be closed Monday through Wednesday this week to get caught up on prepping and smoking meats, but will close its doors for good in February.

Schy now lives in Chicago but said he may take a special trip to Austin to visit Ruby’s before its last day on the Drag.

“The things that made Austin what it is now — this is one of them,” Schy said. “They are pulling one of the bricks out of the bottom of this building, the bottom of the cool part of Austin. It’s a cornerstone. It was for me for 30 years.”