Pakistani musicians and UT faculty will perform together at SXSW 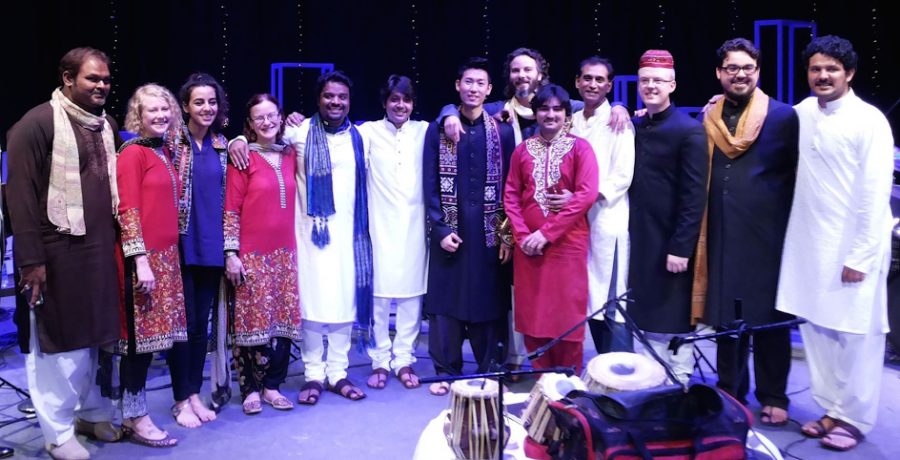 Every year, artists of all genres travel from far and wide to perform at South by Southwest. One of these groups, Sangat, is flying in from Karachi, Pakistan, where music is not taught in public schools and is banned on public transportation.

Sangat is a multicultural and transnational music ensemble comprised of members of the National Academy of Performing Arts in Karachi, Pakistan, and the Butler School of Music at the University of Texas at Austin. Sangat’s name is Sanskrit for “a coming together,” which is fitting given the transnational nature of the group.

Sangat’s compositions incorporate Pakistani raga-based music with folk elements from different regions of the country, such as Sindh and Balochistan, as well as instruments and qualities from other genres, such as blues, jazz, Sufi Qawwali and reggae. Comprised of both NAPA and UT faculty, the group resides in both Karachi and the Austin area.

Sonia Seeman, an associate professor of ethnomusicology at the Butler School of Music, said the opening of a music conservatory in Karachi is extremely progressive.

Seeman explained there are as many hadiths in Islam condoning music as there are condemning it. Given the contradicting views on music in different interpretations of Islam, there has been animosity in Karachi in the past related to the role of music in society, as well as legislation.

According to Dawn, Pakistan’s most widespread English newspaper, Karachi traffic police passed a ban in 2014 to prohibit music from being played in public transportation due to complaints. Two years later, Amjad Sabri, a famous Pakistani Sufi singer, was assassinated by the Taliban in Karachi, who viewed his music as blasphemous.

“Ten years ago, you wouldn’t have seen a musician out on the street,” Seeman said. “On our last visit there, Lee Redfield, a UT graduate student in the ethnomusicology program, saw a flute player outside the airport.”

As a result of the conflicting views on the role of music in different interpretations of Islam, Seeman says that most people in Pakistan are unlikely to engage in or study music.

NAPA and Sangat are defying the social status quo of the role of music as a hobby in Pakistan.

A few of the NAPA junior faculty who came to UT as part of a cultural exchange are starting to teach music at public schools in Pakistan. Seeman said one of them now teaches at a religious school.

“(NAPA) has now become a center for training teachers,” Seeman said. “This has been very revolutionary and it’s quite a brave institution, so we’re really honored to continue this partnership (between UT and NAPA).”

Some of the pieces of music go through four or five different rhythmic meters. One of the compositions has several bars with Middle Eastern modes incorporated.

Seeman emphasized the importance of Sangat’s role in fusing different genres of music and building a bridge across cultures.

“The overall message (of the music) is one of diversity and inclusion,” Seeman said. “This is really what music is about. It’s about bridging across religious differences.”