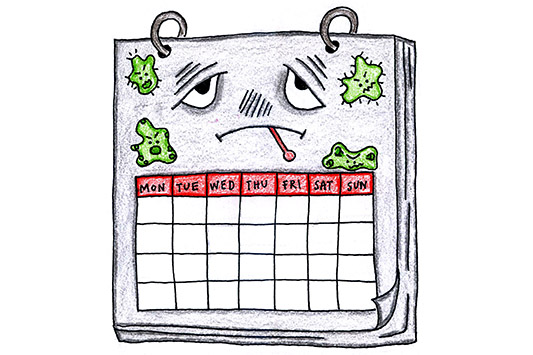 Biology sophomore Anh Doan woke up last Wednesday with chills, coughs and body aches. She immediately went to University Health Services to get her flu shot —  but she had already caught the flu.

Doan was one of the 285 students diagnosed with influenza or influenza-like illnesses, ILI, at UHS last week. Compared to this time last year, flu and ILI diagnoses more than doubled, making up more than 20 percent of total primary care visits last week, according to data provided by UHS.

Kathy Mosteller, UHS director of nursing services, said the severity of this year’s flu season might be the result of a less effective flu vaccine. However, Mosteller said people who get a flu vaccine tend to recover more quickly than those who do not.

“The majority of people we’re seeing that have the flu that had a vaccine are getting a lighter case of it,” Mosteller said. “Sometimes with the flu, the fever can last for several days. Many of our patients (who were vaccinated) are telling us they only had a fever for one day.”

According to an online press briefing by the Centers for Disease Control, hospitalizations for the flu this season have been the highest in nearly a decade.

Mosteller said UHS has seen an increase in flu shot appointments and visits to their influenza webpage since the email was sent.

Karishma Adnani, a management information systems senior, caught the flu two weeks ago and missed a full week of class, but said her professors were very understanding.

“I got a note from my doctor saying I was contagious, and so everyone was very understanding about me staying out of class,” Adnani said. “All my teaching assistants sent me their notes, so it wasn’t too hard (to catch up).”

Doan said she realized the best way to recover from the flu is to stay at home.

“I was always worried about school, like … if I don’t go to class, I’ll be behind,” Doan said. “But literally when you get to the point where you can’t stand up without … feeling dizzy or just (having) fevers everywhere, then you just know you have to stay home.”