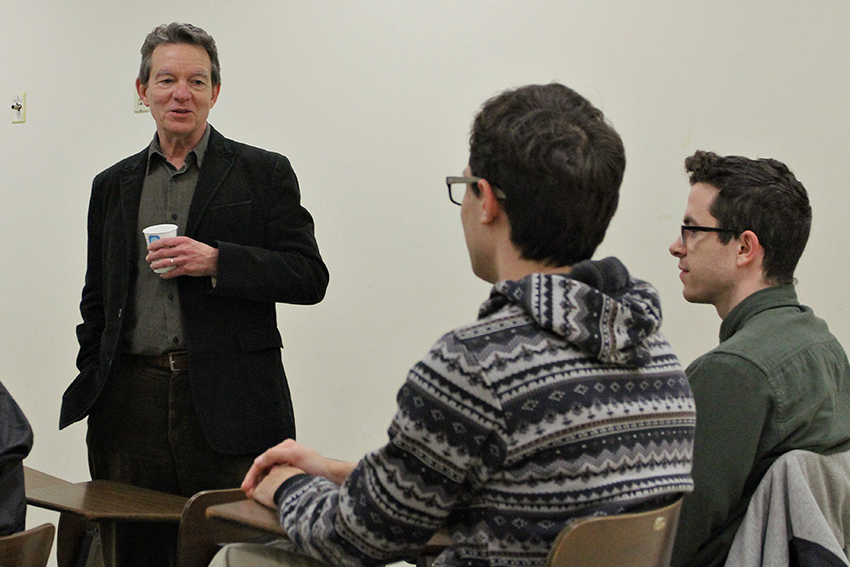 An award-winning journalist came to UT and examined the power of Texas in a Tuesday discussion about energy.

Wright has been a reporter at the New Yorker since 1992 and has written on a variety of topics in his time there. Some of his well-known pieces are “America’s Future is Texas” and “The Dark Bounty of Texas Oil.” A main point of discussion surrounded the Republican divide in Texas between socially conservative Lieutenant Governor Dan Patrick and the more traditional business conservative Joe Straus, Speaker of the House of Representatives.

Wright said business conservatives believe in low regulation and low tax, and have an understanding that they are part of a wider world. But he said social conservatives are backward-looking, rather than forward-looking, to a time in which evolution wasn’t embraced, homosexuality was shamed and abortion was outlawed.

On the topic of the energy industry, Wright said the United States is currently producing more oil than Saudi Arabia and, in coming years, Russia. He also said the Permian Basin in Texas, thought for many years to be exhausted of resources, is now thriving and providing more resources than ever. As someone who has covered terrorism for years, this change was for the better, Wright said.

“I can’t impress upon you enough that Texas is totally back in the energy business,” he said. “It’s an amazing accomplishment, and it’s been an amazing transformation. It disempowers a lot of entities that are profoundly anti-American, and I don’t think that’s a bad thing. It’s a bridge to a future of alternative energy, and I think natural gas is the way to go. “

While Wright acknowledges the environmental downsides of natural gas in comparison to alternative energy sources like wind or solar, he said he sees it as a successful endeavor of lowering emissions compared to coal usage.

“He had written this amazing (piece) that had true insight into Texas that a lot of people were reading,” said classics senior Daniel Orr, Texas Political Union president. “This shook up things and how people saw the state. I wanted them to get a sense of how he sees the problems of Texas, which I think has a great deal of perspective. It’s mind-boggling the kind of discipline it takes to produce the stuff that he’s done. It’s something I really admire.”

Wright also emphasized the importance of various other issues, such as education funding, the effect of economic immigration on political representation and threats from terrorism groups such as IS.

“It’s great to be able to hear from somebody who, especially in this time of journalism, has written some of the most defining pieces of journalism that have definitely been able to play a part in leading a historical narrative,” said global studies sophomore Lauren Nyquist, who attended the event. “(Wright) has seen oil and gas change in terms of industry, and he is optimistic that it will continue to evolve, and I think his idea that we’re not stuck in the status quo is important to allow us to move forward.”

In quoting former state Sen. Wendy Davis, D-Fort Worth, Wright said Texas is not a red state but a non-voting blue state. He said Texas has always been at the bottom of voter turnout, creating a misrepresentation of voter values that echoes throughout the nation.

“I thought it’d be good to talk to the young political future leaders in Texas,” Wright said. “The future is, to some extent, in their hands. If we want to change our state, we have to take control. One has to say that Texans are responsible for their problems that they see because they’ve been so disengaged from the political system, and if they want to change that, they have a chance in March with the primaries.”