Nonprofit Socks for the Sole wants to donate a common item to area homeless: socks 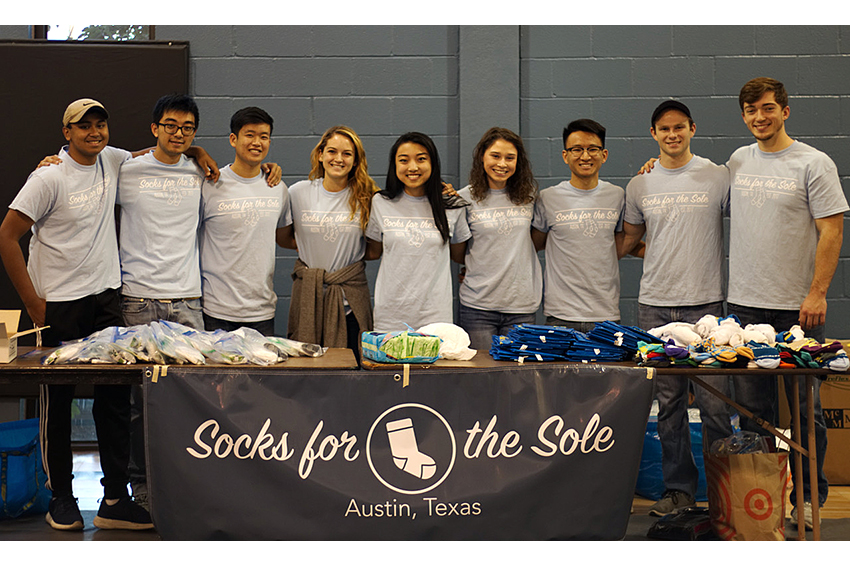 Courtesy of Socks for Sole

Many student–run charity organizations exist at UT, but only one donates a specific kind of clothing to the homeless: socks.

Created by UT students, Socks for the Sole, a 501(c)3 nonprofit, provides socks and care packages to the homeless population of Austin.

Lu Tran, founder and president of the organization, got the idea along with co-vice president Nancy Trinh when they were volunteering for a homeless clinic together.

“So many people have the same (donation) ideas,” said Trinh, a biochemistry junior. “But we noticed there was a lack of socks donated, so we decided to make Socks for the Sole. We also use money from our fundraisers to buy stuff for care packages.”

Tran, a social work junior, said the one thing distinguishing Socks for the Sole apart from other organizations on campus is the way it obtained its 501(c)3 nonprofit certification, which means the charity is a federally recognized nonprofit, as of 2017. Unlike other student–run nonprofit heads, Tran navigated the process of certification without the help of a lawyer.

“We couldn’t spend $500 (on a lawyer) because that’s 500 pairs of socks we could have donated,” Tran said. “We as a group just sat down, looked through every single word on the form, and applied. I thought we were gonna get rejected the first time, but we didn’t. So we just kept going from there.”

The group’s goals for this semester include recruiting new members and hosting more volunteering events.

“We already have socks from last semester that we raised,” said Corey Snyder, the outreach director for the nonprofit. “On Feb. 25, we’re gonna get about 10 people from outside the organization to come to the (Austin Resource Center for the Homeless) — which is a local homeless shelter — and give out socks.”

A series of other “mini-events” are also planned for the group, consisting of sock handouts at various other Austin shelters and sponsored events in the Austin area.

“Austin has over 7,000 homeless people,” said Snyder, a neuroscience junior. “Our big focus now is trying to help where we can here.”

Snyder said the organization could be expanded to other schools.

“If other universities wanted to start something similar to us for their city, we’d be more than happy to help them through the process,” Snyder said.