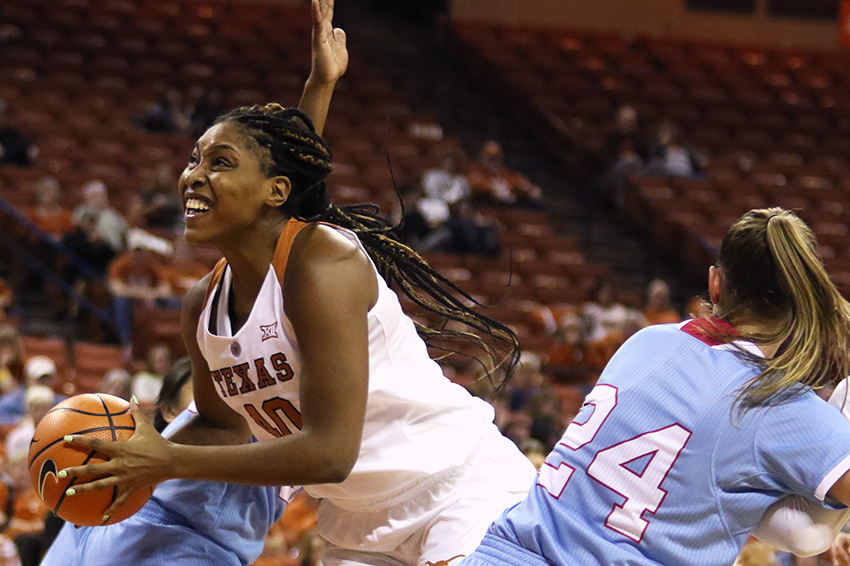 Not every star has to shine bright.

Texas’ backcourt is a red carpet. Senior guards Brooke McCarty and Ariel Atkins will leave behind a legacy when they depart from the 40 Acres this summer, and both have been projected to get picked in the Associated Press’ latest Mock WNBA Draft.

But behind the scenes of Texas’ blockbuster duo is junior forward Jatarie White.

White is Texas’ anchor in the paint. The Charlotte, North Carolina, native is the poster child of consistency, averaging a team-high 5.7 rebounds per game to go along with 10.4 points per game.

Although White’s knack for crashing the boards rarely shows up on the highlight reel, it’s a crucial component to the Longhorns’ success. Texas is averaging 12.5 more rebounds per game than its opponents this season, leading to not only more second-chance opportunities, but more points as well.

The No. 6 Longhorns leaned on White to set the tone once again on Monday as Texas took down West Virginia on the road, 73-55. The 6-foot-4-inch forward put on a clinic in the paint, finishing the night with 18 points and 10 rebounds — both game highs.

The Mountaineers had no answer for White as she shot an efficient 7-for-10 from the floor and snagged four offensive rebounds in the win.

“I came into the game trying to have an aggressive mindset,” White said. “As the game went along I had to adjust, but I worked on getting those offensive boards. I think that’s what really helped get my momentum going.”

White is a steady hand for a Longhorn squad that’s been shaky as of late, dropping three games in the month of January alone. Texas will need White’s production on Saturday when it hosts Kansas State at the Frank
Erwin Center.

The Wildcats held their own in the first outing on Jan. 7, outscoring the Longhorns, 15-12, in the first quarter before ultimately falling short, 75-64.

In a game that Texas never managed to run away with, the Longhorns got the edge thanks to a 16-point advantage in the paint. White was the difference once again, totaling 10 points and five boards in the win.

It’ll take a group effort from fellow forwards Joyner Holmes and Audrey-Ann Caron-Goudreau for the Longhorns to complete the sweep come Saturday.

“I think all our bigs will be important,” head coach Karen Aston said. “They all give you something different, and they’re all ready to contribute.”

It’ll be an uphill battle for the Longhorns as the Wildcats look to secure a season-defining win on the road. Kansas State has surrendered just 65.1 points per game to its opponents this season, limiting the other team to a .386 field goal percentage in the process.

“I fully expect (a battle),” Aston said. “(The Wildcats) are a team that we struggle with because of how good their zone is, I do think they’ve got some players that are playing really well lately too. I know they’ll come in here ready to play.”

Fortunately for the Longhorns, they’ll have the fans at the Frank Erwin center to back them up. Texas has been dominant at home this season, boasting an 11–1 record with an average win margin of 29.7 points.

And for a player that doesn’t always get the national spotlight, White still knows she’ll get one at home.

“I love playing at home,” White said. “It gives me a lot of momentum when they’re cheering, so it’s a good boost of confidence.”

Texas is set to tip off against Kansas State on Saturday at 7 p.m. at the Frank Erwin Center.