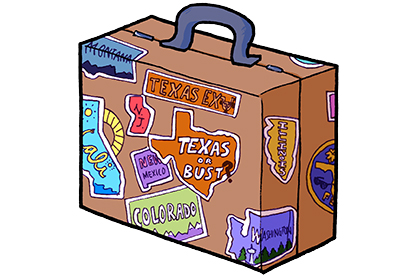 Texas law restricts UT-Austin’s out-of-state student population to 10 percent, and despite Chancellor William McRaven saying that he would be open to increasing that percentage , there isn’t any indication that more out-of-state students will be packing their bags to move to the 40 Acres any time soon.

Regardless, many out-of-state students are drawn to Austin because of the city’s unique environment and culture. Finance sophomore Matt Snyder is from the frigid land of Boston, and he said the initial appeal of Austin was the heat, but when he visited he came to love the city’s growing atmosphere as well.

“I came to Austin and there were all these cranes everywhere,” Snyder said. “Like everything’s coming up.”

As it was for Snyder, Austin’s growth is appealing to many students who decide to attend the University. Computer science sophomore Vignesh Chilecampali, a native  of North Carolina, said he was hooked on the city right after his first visit and plans to stay in Austin after graduation.

“I really liked the environment of Austin because I felt that it was a mid-sized city,” Chilecampali said. “And it had all the amenities I wanted such as activities to do on the weekend and a city vibe.”

Many out-of-state student love Austin, but there are some drawbacks to coming into a school full of so many students from the same area. Hannah Leigh Rens, an aerospace engineering sophomore, hails from Iowa and said although she loves everything about UT, she still had trouble getting settled into the school.

“It was definitely hard freshman year to go out and meet people, because so many kids come here knowing people from their high school,” Rens said.

Rens isn’t the only student who felt this struggle. Chilecampali said he also felt that most students came to UT with a premade friend group, making it difficult to find his niche. Some out-of-state students may take a semester to a year to find their home at UT, leaving them feeling displaced.

Rens even said she found it hard to make friends with other women, despite joining a sorority in her first semester.

Making friends isn’t the only challenge that students may find coming to Texas — housing is another issue. Snyder said he had difficulty getting an apartment or dorm that suited his preferences, and he had to race to get an apartment in West Campus. Additionally, he said that he felt he was at a disadvantage in the housing process.

“A lot of my friends lived in Callaway last year, and they signed up their junior year of high school,” Snyder said. “And I was like well, there’s no way I would’ve known to sign up that early.”

To avoid future housing issues for incoming out-of-state students, Snyder suggested randomizing the process or not allowing people to designate dorms until a certain time.

Rens said despite transition issues, many out-of-state students love attending UT and being around Texans in general. Not only that, Rens and Snyder agree that Tex-Mex, sports and the sunny weather here are unparalleled. Rens said once she found her niche, she didn’t want to leave.