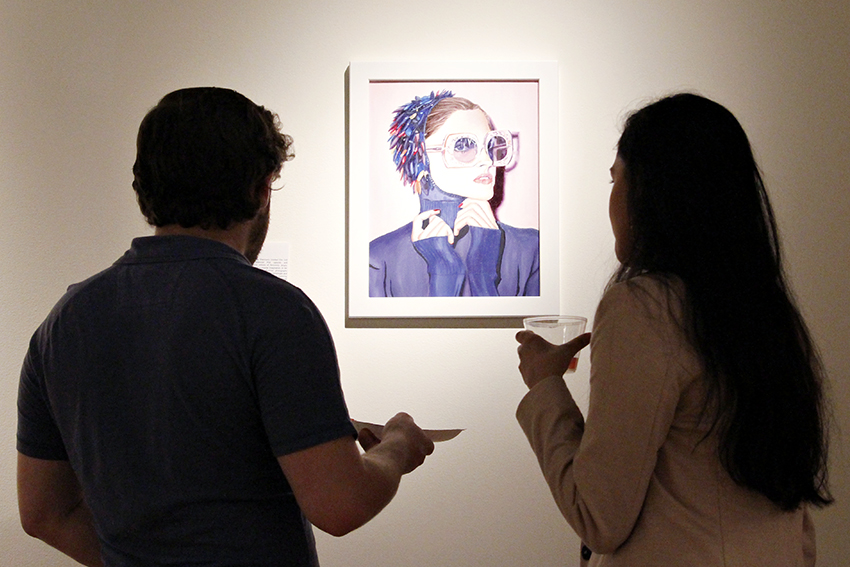 As a crowd of people assembled around his daughter’s painting, Tony Huang made a point of letting them know he was in town for one reason: to support his daughter, Kaelyn Huang, at her first appearance in an art show.

“I just drove in now — like literally just now — from Houston,” Huang said. “You could sell this level (of art).”

The portrait with which the father was enamored is called “Millennial Pink,” submitted by his daughter for Untitled, an exhibition by the Undergraduate Art History Association. According UAHA’s website for the event, the goal of Untitled is to explore “the relationship between contemporary art and the theory of the past.”

“Everyone in the show is either a studio art major or a visual arts studies major,” UAHA president and art history Keya Patel said. “We’ve written labels where we’ve compared all their pieces to a specific artwork from the past.”

The curators of Untitled began accepting artwork submissions in December. After making the final selections for the exhibit, the UAHA wrote short descriptions of the art to be featured with the exhibits in which they compared each piece to the work of a historical artist.

Not all of the pieces in the exhibition are images. Visual art studies junior Shelby Flowers constructed a sculpture called “Carcosa” out of wood, metal, moss and deer antlers. The structure stood at more than five feet tall and had to be disassembled and rebuilt in the gallery.

“The idea for the sculpture came from a TV show called True Detective,” Flowers said.

Patel said she could see Flowers’ dedication to her sculpture.

“Shelby got the moss herself from a swamp over the weekend,” Patel said. “We actually found spiders in the gallery and we had to kill them.”

Each artist said their final product took substantial time and effort in putting together. Huang said she would consider selling her painting, at her dad’s suggestion, because of the energy she put into it.

In the end, less than 20 pieces were chosen out of 75 submissions, according to UAHA vice president Mackenzie Nissen. The artists will now have their work showcased for two weeks at the Visual Arts Center.