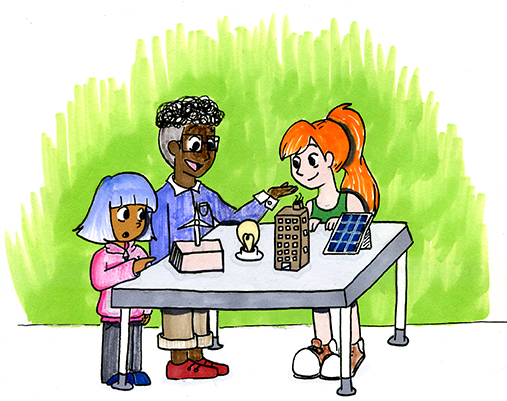 In the wake of hurricanes, flooding and wildfires that afflicted the U.S. in 2017, the 2018 Alternative Energy tasks students to create clean energy devices to support disaster relief efforts.

Student teams will have about two months to design a prototype device that uses a clean energy source and minimizes waste. Prototypes will be presented in April to a panel of judges who will select the $3,000 grand prize winner.

The competition is organized by Engineers for a Sustainable World and the Innovative Energy and Efficiency Project Power and Energy Systems. The teams that make it to the build stage will use MakerStudios resources located in the Engineering and Education Research Center and an allocated budget for their prototype. The device must be applicable to pre-disaster, immediately after or post-disaster relief efforts.

Sam Wicoff, biomedical engineering senior, was the sole organizer of last year’s competition, and is at the helm once again in 2018. He said he hopes the focus on disaster relief will be an improvement on what he described as a lackluster event last year.

“The prompt last year was so broad that teams didn’t really know how to create a project,” Wicoff said. “Creation of a project with real-life application is one of the lofty goals this year.”

Nitya Nandagopal, electrical engineering freshman and organizing committee member, also said the focus of the competition is on the relevance of engineering to environmental disasters.

“We want to give students the opportunity to experience designing and building prototypes that can solve real-world problems,” Nandagopal said.

Nandagopal said the competition is the chance for people to translate their interests in these issues to action.

“Building renewable energy systems is something a lot of people talk about … but may not have the chance to,” Nandagopal said. “It’s nice to be able to provide this opportunity.”

Hansen Qin, mechanical engineering sophomore, said he has a passion for building and design, but identified the cash incentive for the winning team as his reason for signing up.

“The cash prize for the competition is insane,” Qin said. “(I also) am currently interning at a renewable energy company … so I would love to put what I learned … into practice.”

The registration deadline was Feb. 12. Final presentations and grand prize winners will be announced on April 14. The location of the event is yet to be decided, but updates will be posted both online and in the EEG building.