Syrian actor and playwright expands the role of theater 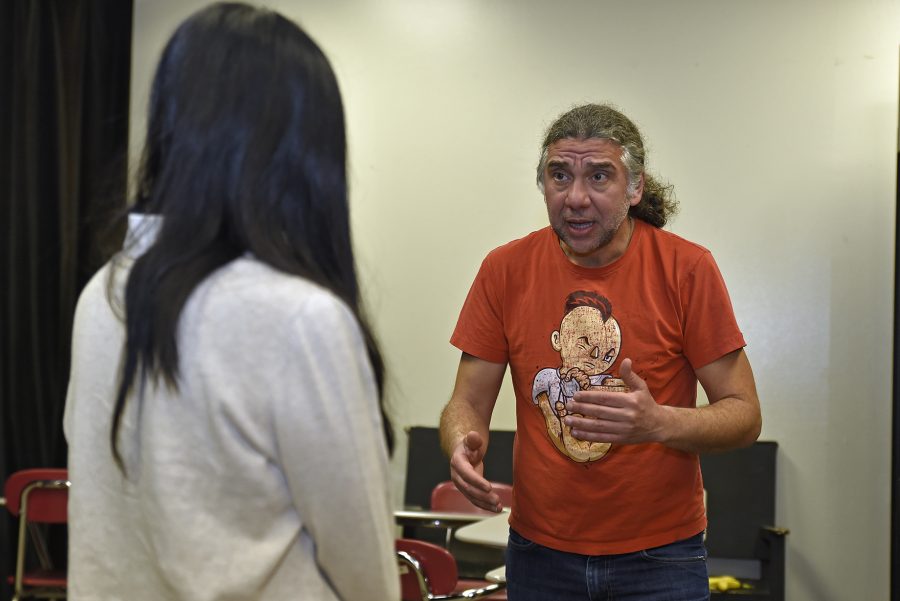 When people think of Syria, the first things that come to mind may not be Shakespeare, theater and self-expression. Nawar Bulbul, Syrian actor and playwright, is changing that.

Bulbul led three graduate students in an intimate acting workshop on Monday at the Winship Drama Building that attempted to break barriers between performers of different nationalities. The session was the first installment of the “Theatre and War Workshop Series” hosted by the Performance as Public Practice program.

Bulbul instructed the students using broken English, communicating with his gestures as much as with his words.

“It’s a great example of how different art forms can be cultural currency,” said Kate Van Winkle, one of the three theater doctoral candidates Bulbul taught. “It doesn’t really matter where you’re from if you have these common practices to share.”

Bulbul gained prominence for his role in the Arab historical drama “Bab Al-Hara,” but has recently gained international recognition for his work in Syrian refugee camps, which he began in 2014. Bulbul has staged productions of Shakespeare with shelled-out buildings as his stage and war orphans as his performers.

Bulbul said the performances empowered the children to explore their identities.

“We have two girls,” Bulbul said. “They have hijab. After the show, no hijab. This is the influence, I think, of this show.”

Monday’s workshop was followed by a screening of “Shakespeare in Zaatari,” which depicts Bulbul’s staging of King Lear in the Zaatari Refugee Camp in Jordan.

“This documentary has been a good tool for people to start to understand what life is like inside a refugee camp,” Pitchford said. “You see it on the news, but you can’t gain an understanding of what is happening. It’s really opened some minds.”

“The people that Nawar is working with would typically be considered some of the most fragile human beings, because of the trauma that they’ve been through,” Pitchford said. “Performance can open up ways for people to reconsider their identity, and also to build resilience.”

Two more workshop sessions will take place Tuesday and Thursday evening, each followed by a different documentary open to the public. Bulbul and his students will perform live Friday.