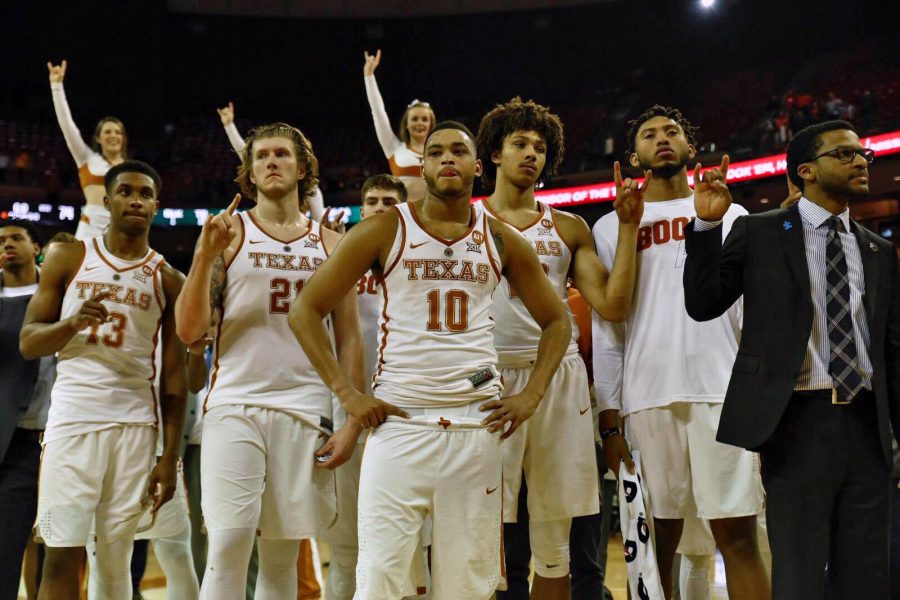 With eight seconds left on the clock in double overtime and a one-point deficit for Texas, junior guard Kerwin Roach II drove right and threw up a long runner in a desperate, final look.

But like so many of Texas’ shots on Monday evening, the floater fell short and Baylor grabbed the rebound.

It was a pivotal loss for a sliding Texas team that dampened any hopes of making the NCAA Tournament. After posting an impressive 11–2 home record through its first 13 games, Texas has now dropped back-to-back games at the Frank Erwin Center for the first time this season.

“They are really upset,” Texas head coach Shaka Smart said. “And some of these guys are really angry, because some of those guys put their egos aside and came together in terms of attacking and battling. But obviously we came up one stop short.”

Live from The Erwin Center as Texas drops its third straight game to Baylor, 74-73. https://t.co/P1ADdi49iJ

The Longhorns rank at the bottom of the Big 12 in 3-point shooting, a fact that Baylor took full advantage of in the opening half. Even with freshman guard Jase Febres — the team’s top marksman from three — back in the starting lineup, Texas shot a miserable 2-of-11 in the first half from deep.

The Longhorns converted on just one field goal at the midway point of the half. And even then, the points came on contested mid-range jumpers. The offense was flat.

With under 10 minutes to play in the first half, Baylor scored on an easy layup off an inbound pass, forcing Texas head coach Shaka Smart to burn a timeout. That break proved to be the turning point of the opening period.

“Particularly in the first half, they didn’t let (poor shooting) get them down,” Smart said. “We had some good looks we didn’t make. We got the ball inside pretty well a few times where we didn’t put it away. That happened a couple times.”

Out of the timeout a three by junior guard Eric Davis Jr. gave Texas a badly needed spark. Roach got a dunk off a steal, then freshman forward Mo Bamba brought the crowd to its feet with a thunderous dunk off the lob from the junior guard to cut the lead to one.

Moments later, the same duo connected on an identical, yet even more spectacular, alley-oop, and Texas took its first lead since the opening seconds.

The two teams traded baskets and entered halftime separated by a single possession, with the Bears clinging to a two-point advantage.

The Longhorns missed four uncontested shots from behind the arc to open the second half, including an airball from Davis as Baylor jumped out to an early five-point lead.

But it was Bamba who set the tone again for Texas. A huge rejection on Baylor forward Jo Lual-Acuil Jr. led to a layup on the other end for Bamba — Texas’ first points of the second half after nearly five minutes.

Baylor maintained a two-possession advantage until the 11-minute mark. Whether it was mismatches or a lack of effort from Texas, the Bears had little trouble abusing the Longhorns on both ends of the court. Texas looked deflated as Baylor pressed the attack, pulling ahead by eight with four minutes to play.

But the Texas players kept grinding. On the heels of a technical foul by Baylor, a late three from freshman guard Matt Coleman and a scoop layup under the rim brought the Longhorns within one with 30 seconds left in regulation. Moments later, Coleman went to the line, calmly hitting two free throws to tie the game for the Longhorns at 56.

Again both teams failed to create any meaningful separation.

Texas and Baylor traded layups on both ends as time ran down. With under 15 seconds to play, Baylor took a one-point lead on a dunk inside.

“I knew that Mo was going to block the shot, and I was just hoping for a good miss,” Lual-Acuil Jr. said. “And thankfully I went up and I got it.”

The late runner by Roach proved just off the mark, and Texas (15–11, 5–8 Big 12) saw its postseason hopes suffer a massive blow in disappointing fashion.

“Slow starts make it tough,” Smart said. “That being said, our guys battled and forced overtime, forced double overtime. But even as we took the lead, they weren’t able to stop them.”