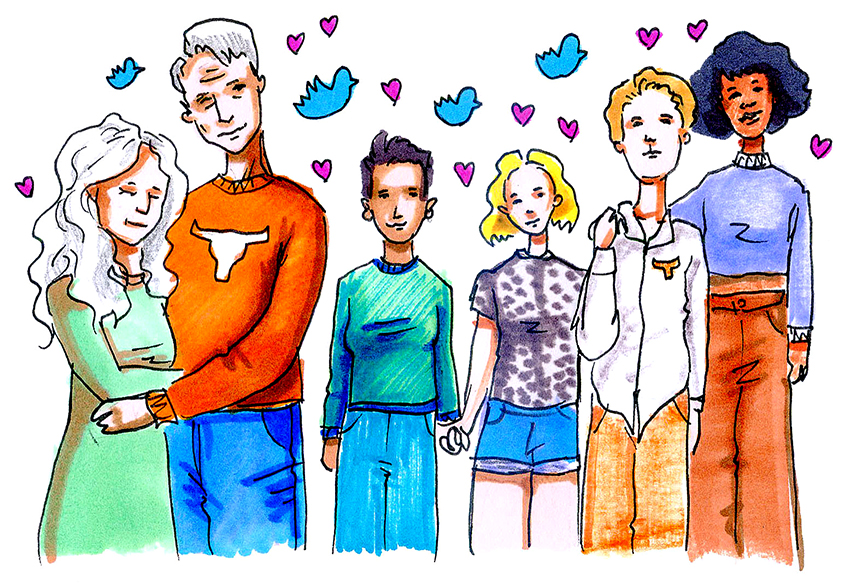 While getting dinner at J2 almost 11 years ago, Cecilia Lopez Cardenas met her husband in line.

“I had never met him before, and I was just chatting with him,” said Cardenas, assistant director of communication and outreach for UT RecSports. “I was just expecting to go and meet my friend for dinner … When I get to the table, he’s at that same table.”

Cardena’s story was one of many shared on social media through the hashtag #LonghornLoveStory on Facebook and Twitter. Many students, faculty and alumni used the hashtag to tell their own love stories. With all of the responses, the University invited 15 of the couples who replied to their request to share their stories in a video for Valentine’s Day.

After hearing about the idea from members of the communications staff at McCombs, Desere Cross, media relations and social media coordinator for the Office of the President, said she was inspired to ask for people’s love stories on the University’s social media accounts.

“People started sharing their stories with us, and I thought to myself, ‘Wow, these are cuter than I thought they were gonna be,’” Cross said. “I didn’t realize that there were so many things on this campus that were connecting people together.”

Biology freshman Gaspar Pina Jr., one of the students interviewed, said he posted his story on social media because he wanted people to see the unique relationship he has with his boyfriend, architectural engineering freshman Guadalupe Flores.

“A lot of people think that people like us, homosexual men, can’t have a fun relationship or good relationship,” Pina Jr. said. “But I just wanted to showcase to everyone that it is possible, regardless of your sexuality.“

Pina Jr. met Flores before they even arrived on campus, while scrolling though the #UT21 hashtag on Twitter. The two made their relationship official during a kayak trip around Austin last April.

“The word that highlights my relationship is probably ‘amazing,’” Pina Jr. said. “Because there aren’t many relationships like this at UT or anywhere.”

Cardenas said she hoped to use her relationship to inspire other people to find their place at UT.

“The University has been such a huge part of many milestones in my life, so I really wanted to share that with others,” Cardenas said. “My hope was just to inspire others to create their own sense of belonging on campus.”