Boneheads bend it like Beckham in ‘Early Man,’ a fossilized football flick 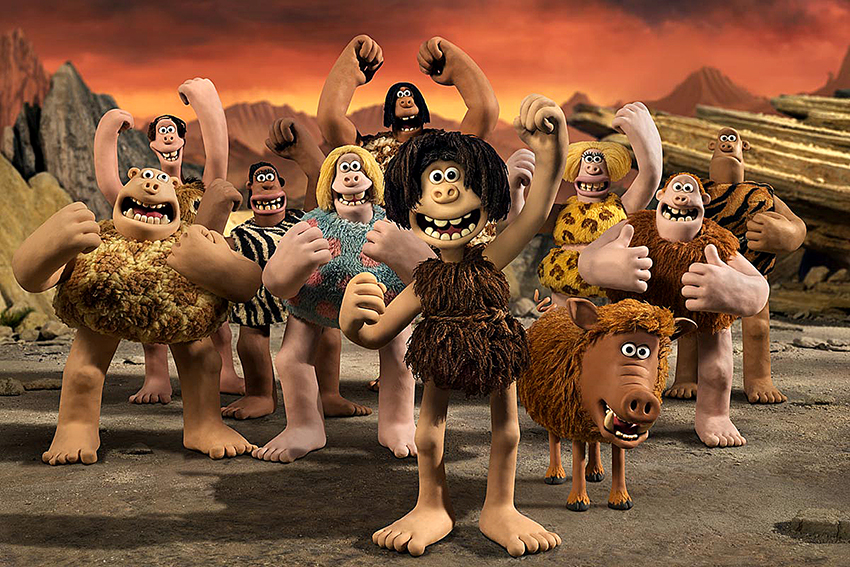 On paper, “Early Man” shouldn’t work — it’s a claymation film from a small British studio about a prehistoric world where all of the cavemen play soccer instead of hunting mammoth. But where the film could go the easy route and just tell a well-trodden story about finding one’s self, it uses the time period as a modern commentary on racism, sexism and industrialization while delivering more than a few laughs along the way.

With “Early Man,” British animation house Aardman, known for their distinctive animation style and sharp wit in past releases like the “Wallace and Gromit” films and “Chicken Run,” returns as a dominant force to the field of claymation. Veteran writer and director Nick Park is as good as ever, utilizing stunning visuals and a brilliant script to deliver yet another solid addition to his long line of quirky, intelligent children’s films.

Eddie Redmayne leads the all-star cast as Dug, a stone age man who lives in an oasis-like valley with his tribe, cut off from the rest of the world. Unlike the other members of his tribe, he longs for something greater, but Chief Bobnar (Timothy Spall) makes sure Dug understands that cavemen are only meant to hunt rabbits.

Predictably, trouble comes to the tribe with the abrupt arrival of The Bronze Age, when Lord Nooth (Tom Hiddleston) leads a fleet of bronze-clad elephants in knocking down the valley’s trees in search for new mining areas. While it’s a bit on the nose to have a character literally knock down trees in search of precious metals, Park nevertheless deserves credit for using his platform to elevate this children’s tale.

Through a clever trick of plot gymnastics, Dug discovers the only thing Bronze Age citizens love more than bronze: soccer (which this review will henceforth refer to as “football”). He challenges Lord Nooth to a football match between his tribe, who have never played soccer, and the Bronze Age’s best team, Real Bronzio — winner gets the valley.

The Bronze Age citizens dismiss the heroic tribe as “cavemen,” unintelligent and uncivilized. Though Lord Nooth agrees to Dug’s terms, he kicks the tribe out of his village into the badlands, where volcanoes erupt and dinosaurs roam. As with the environmental connection, Park has no interest in subtlety, going as far as using the wall between The Bronze Age and the badlands to take a jab at Brexit. It follows in the footsteps of last month’s equally delightful “Paddington 2,” the British film that also used a childish premise to criticize modern English politics.

The final bit of narrative setup revolves around Goona (Maisie Williams), a Bronze Age citizen who longs to play soccer but is not allowed to because of her gender. A brilliant player, Goona agrees to join and train the Stone Age tribe’s team, riffing on long-used tropes in underdog sports films. By mashing two disparate types of movies together, ancient history films and sports films, Aardman animation creates something unique.

Aardman’s visuals in “Early Man” should not go unnoticed, as it’s truly some of their best work. An easily identifiable visual shorthand (larger lips and smaller noses) easily allows the viewer to differentiate between Stone Age and Bronze Age characters without falling into caricature or stereotyping. Each creature, whether a small rabbit or massive dinosaur, is brought to life, given extensive detail and expressive facial animation. The backgrounds are particularly gorgeous, providing depth and beauty to every shot, drawing the viewer into this prehistoric world.

After 30 years of great British claymation from Aardman, “Early Man” had large shoes to fill. Thankfully, it fills those shoes with ease, delivering yet another delightful, socially conscious children’s film.