Column: ‘One play away’ could be the downfall of the 2017-18 Longhorns 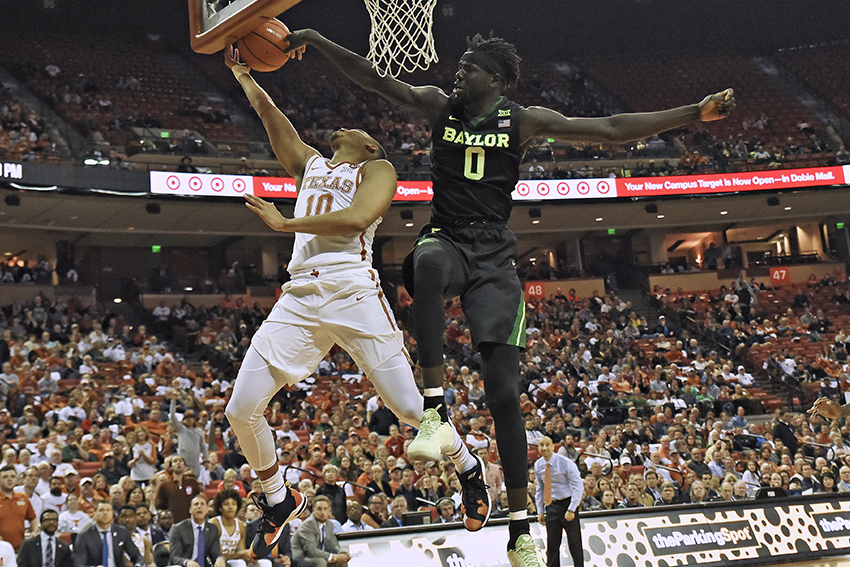 One play away, and it changed everything.

Tension lingered in the air at the Frank Erwin Center on Monday night. Frustration overwhelmed several members of the Texas roster following the Longhorns’ 74-73 double-overtime loss to Baylor. A chair was punched, and a players-only meeting was held immediately after the game.

“We were one play away,” Texas head coach Shaka Smart said after the loss. “When it doesn’t go your way, you have to immediate analyze why and how to get better.”

After over 49 minutes of fighting and almost clawing their way to a much-needed victory, the Longhorns saw their brief 73-72 lead in double overtime dissipate before their eyes when Baylor guard Manu Lecomte’s layup rattled off the rim and into the waiting hands of Baylor center Jo Lual-Acuil Jr., who rose up for an uncontested putback slam.

The clock’s life was limited to just 10 ticks, and Texas was unable to respond, allowing Baylor to prevail in Austin.

Lual-Acuil’s dunk meant a lot more to this Longhorns team than just a devastating home loss. It meant their season.

After a statement victory over then-No. 12 Oklahoma in front of a sellout home crowd, Texas had everything trending in its favor. But in the nine days after, the Longhorns dropped three straight games, including two home games to teams equal or lower to Texas in the Big 12 standings at the time.

On Monday morning, prior to the Baylor game, Joe Lunardi, ESPN’s chief “bracketologist,” listed Texas as a 10-seed in his projected NCAA Tournament bracket. But after Monday’s loss, it appears unlikely that the 15–11 Longhorns can sneak into the tournament, which seemed to be a certainty just a month ago.

Texas’ upcoming schedule consists of five games: three are on the road, three are against ranked opponents and four are against opponents Texas has already lost to this year. Road games against No. 23 Oklahoma and No. 13 Kansas seem like longshots with the way this Texas team has played away from Austin this season. No. 20 West Virginia, which shredded Texas by 35 points in the teams’ first meeting, will pay a visit to Austin in the regular season finale.

One way the Longhorns can clinch a tournament bid involves winning the Big 12 conference tournament in early March. But a more likely way is to earn a coveted at-large bid. In 2017, just four teams with less than 20 victories secured at-large bids, with Vanderbilt sporting the worst record at 19–15.

But the biggest problem with Texas dropping games to Kansas State and Baylor — especially in its own arena — is that the Longhorns are feeding and providing fuel to their at-large competition. Texas now possesses worse conference and overall records than Kansas State and Baylor and the same record as Oklahoma State — the latter of the three aren’t even in Lunardi’s field of 68 yet.

Texas failed to separate itself from this competition, compiling an 0–4 record against the aforementioned opponents this season. And in most of those games, Texas was, as Smart said Monday night, just one play away.

If Texas doesn’t hear its name called on Selection Sunday on March 11, they’ll likely lament on all of the game-changing plays that cost the team from creating greater gap between the win and loss columns.

Texas is 2–4 in one-possession games and 2–4 in overtime games this season. Perhaps struggling to closeout those games could provide a different, frightening closeout to Texas’ 2017–18 season — the NIT.