Has the Drag lost its local charm? 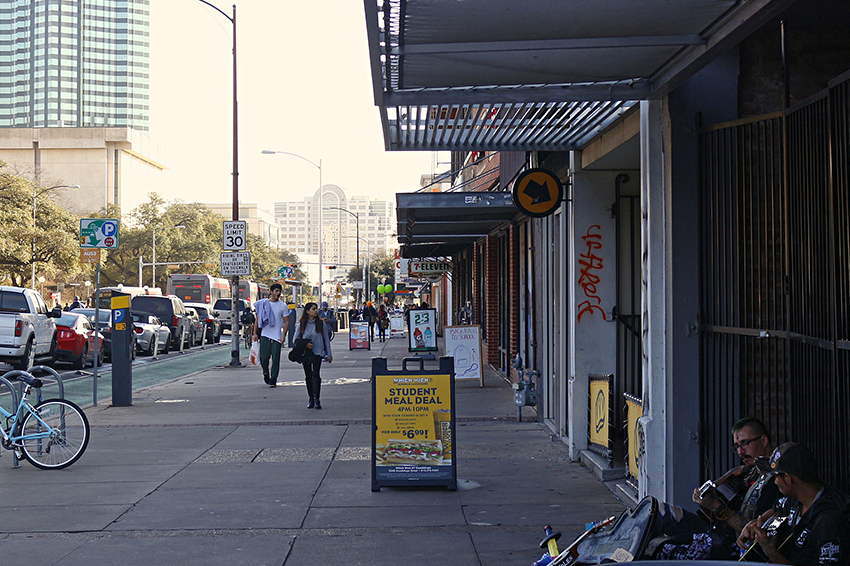 The names Captain Quackenbush, Inner Sanctum and Les Amis are likely unfamiliar to a current UT student, but in the 1970s and 1980s, they were instantly recognizable as just a few of the quirky, locally run stops near the Drag.

With rising property rates over the past few decades forcing local businesses to either relocate or disappear, Guadalupe Street is barely reminiscent of its former self, which begs the question:  Has what made the Drag “weird” disappeared with past businesses?

“It’s always more interesting to have local businesses in place, but that’s kind of just the nature of the world we live in,” alumnus Avrel Seale said. “Economies will force a form of gentrification and continue to make corporate outlets more viable.”

Seale graduated from the University in 1989 and now works for UT in the marketing and creative services office on Guadalupe Street. For him, the old Drag is a blur of thumbing through vinyl at Tower Records and going on dates with his girlfriend at Captain Quackenbush’s Intergalactic Dessert Company and Espresso Cafe.

The complex on 504 W 24th St., which now houses a Smoothie King and a Starbucks, was once packed with local gems. Seale said he remembers Les Amis Cafe, an iconic French flavored hole-in-the-wall, squeezed next to Inner Sanctum Records, where a cluster of chains now resides.

“The shops were so hip back then, and now it’s a lot of chains, a lot of fast–food type of places,” said Joe Bryson, former owner of Inner Sanctum Records. “It’s kind of sad to me. It just doesn’t have the feel of what it was.”

When he was 21 years old, Bryson opened Inner Sanctum in 1970 in a city fresh to the music scene. Within four years, he broke his first million in sales and put the local record store on the map.

“I’d flip on a light–switch and the place would fill up with people,” Bryson said. “It was so much fun, and every day in Austin was so exciting then. (Local businesses) created the scene together, it was something really special.”

Bryson said his rock’n’roll lifestyle included curating records and meeting people from around the world. He said the West Campus area was “like a gigantic family,” and remembers the Drag’s local flair.

Although Carly Jordan, a journalism and radio-television-film junior, wasn’t around to see these local businesses, she said it’s interesting to think about a time when stores in Austin were less commercialized.

“It kind of sucks because when I think of Austin I think of more of a ‘hip’ place,” Jordan said. “I think it would be cool to have more local places (on the Drag).”

Bryson sold Inner Sanctum in 1984, and it stayed open for another 12 years until finally closing in 1996. He said he will always remember when Inner Sanctum would open as the busiest store on the block.

“Inner Sanctum (was) the best place to be in Austin,” Bryson said. “Austin is the best city in Texas, and Texas is the greatest state in the Union, and the United States is by far the best country in the world, so half a day every day I felt like I was sitting on top of the world.”