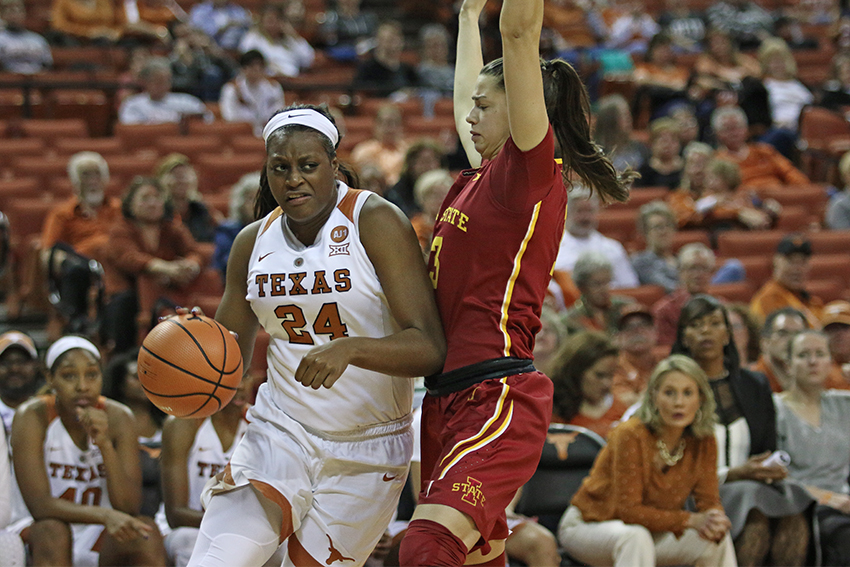 Joyner Holmes’ name blasted through the Frank Erwin Center. She ran out of the tunnel onto the hardwood, horns raised and grinning ear-to-ear.

She was finally a starter.

The sophomore forward started in 32 of Texas’ 34 games last year but hadn’t been a part of the team’s first five since the Longhorns’ NCAA regional semifinal loss to Stanford on March 24, 2017.

She was suspended from the team during the fall semester due to a university violation. When she returned, Texas already had an established starting frontcourt in senior guard Ariel Atkins, senior forward Audrey-Ann Caron-Goudreau and junior center Jatarie White. Texas brought Holmes off the bench every game this season — until Wednesday.

Caron-Goudreau was ruled out with a bruised left wrist in the Longhorns’ 87-72 win over Texas Tech on Wednesday. Aston slotted Holmes in the senior’s place. Holmes felt the pressure.

“Starting (is more challenging),” Holmes said. “When you sit, you can see the mistakes that (your teammates) are making and what coach wants you to go in there and do differently. When you start the game, you’ve just got to go in and do what you’ve learned through shootaround and through practice throughout that week.”

Holmes did a solid job. She finished the game with 13 points, nine rebounds, two assists and a steal. But it was clear that both the sophomore and her teammates will need to time to adjust.

Although they play the same position, Caron-Goudreau and Holmes have different skill sets.

Caron-Goudreau plays more in the high post. She’ll wander around the gray area between the lane and the three-point arc looking for places to spot up for a jump shot or finding ways to get her teammates open. She understands that White, who mostly posts up on the block, needs breathing room to bang inside.

Holmes likes to operate as a rim-runner. She’ll set a screen for one of Texas’ guards near the top of the key, then rumble her way to the interior for an easy nod at the rim. Most power forwards can’t keep up with her. When opposing teams stick smaller, quicker players onto her, she’ll use her size advantage to bash them in the paint.

“I see Joyner more as a guard/forward,” White said. “Joyner does a lot of driving and things like that. She’s really athletic. But I think they both play really hard, and I like playing with both of them.”

White’s post-move party tricks aren’t as effective when a teammate such as Holmes — and another defender — are in close quarters. But neither White nor Holmes have the range to journey far from the basket.

On top of that, neither player has the same defensive instincts that Caron-Goudreau brought to the table.

Texas’ road matchup with No. 21 Oklahoma State (18–7, 9–5 Big 12) on Saturday won’t be much easier. The Cowgirls boast the conference’s leading rebounder and No. 4 scorer in senior center Kaylee Jensen.

“They have a very formidable frontcourt,” Aston said of Oklahoma State. “We have to be tremendously better defensively, and we’ll go from there.”

“I’m going to come in and do what I can to help my team,” Holmes said. “I think I have made some progress. I’m not where I want to be yet, but I’m going to continue working in practice and trying to get myself back.”