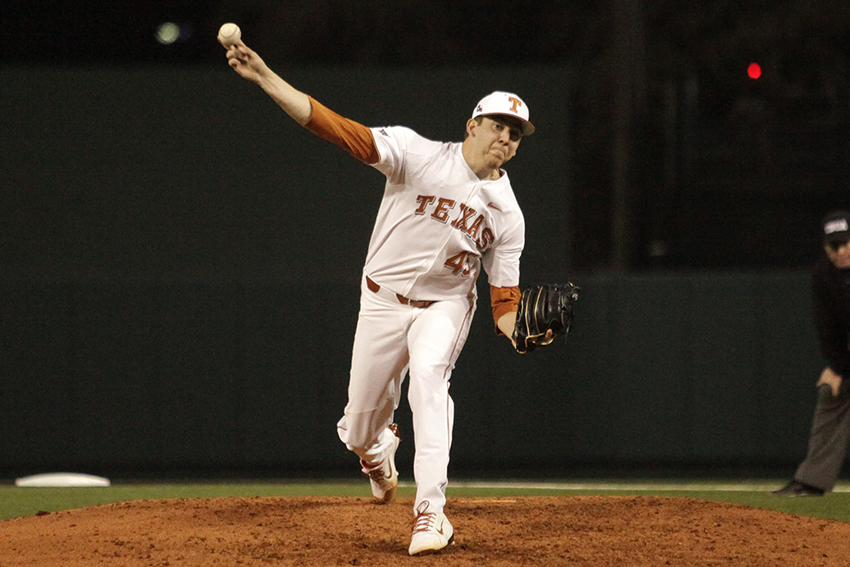 After a dominant sophomore campaign in 2017, junior pitcher Nolan Kingham came into this season surrounded by a cloud of hype and high expectations.

The preseason All-American more than lived up to the billing Friday night at UFCU Disch-Falk Field, frustrating Louisiana-Lafayette batters en route to a career-high 10 strikeouts and a shutout 3-0 opening day victory for Texas.

After giving up a single to his first batter of the season, Kingham locked in, allowing only two hits and a walk the rest of the way. He threw an efficient 89 pitches in eight innings of work.

“First innings were a bit bumpy, and I think I was a bit antsy and was trying to do too much,” Kingham said. “But after that I settled in and everything took care of itself. It’s awesome going out there for as long as a can. I felt a lot more juiced up tonight.”

While a strong pitching night from Kingham has come to be expected for Texas, it was a fresh face making the difference in the Longhorns’ lineup. Junior infielder Masen Hibbeler, a transfer from Odessa College, dazzled in his Texas debut.  Hibbeler notched three hits — half of Texas’ total for the game — scored two runs and stole two bases.

Hibbeler fed off the thrill of playing his first game as a Longhorn.

“First game here (at Texas) and it’s a lot of fun — I learned that real quick,” Hibbeler said. “I just tried to stick to my approach and keep it simple and keep it rolling.”

Texas’ bats were far from explosive in the opener, but the team managed just enough offense to coast to a win. The Longhorns stranded eight runners on base and struggled to get the ball out of the infield, managing only two extra base hits.

Despite the apparent struggles, head coach David Pierce was still satisfied with Texas’ offensive performance. He praised the team’s quality at-bats and patience at the plate.

“One thing that’s probably going to go overlooked is that I really thought our offense was much better than what the scoreboard said,” Pierce said. “We had a lot of quality at-bats. There’s improvements to be made, but I was really pleased with our approaches (at the plate).”

Hamilton scored the game’s first run in the bottom of the third inning on an RBI groundout from sophomore outfielder Austin Todd.

In the fifth, it was Hibbeler that found a way to round the bases. After a single and a steal to leadoff the inning, the infielder made his way to third base after a balk from the pitcher. Junior infielder Kody Clemens sent Hibbeler home with an RBI single to right field. Hibbeler scored another insurance run in the seventh off an RBI double from sophomore outfielder Austin Todd.

The win marked the first opening day victory for the Longhorns since 2015. The team returns to Disch Falk-Field Saturday at 2:30 p.m., as Texas goes for the series win and looks to build off the momentum from a solid start to the season.

“With this group of guys, winning is expected,” Kingham said. “We’re just going to keep moving forward. It’s Opening Day — you can make it as big as you want, but it’s just another game.”