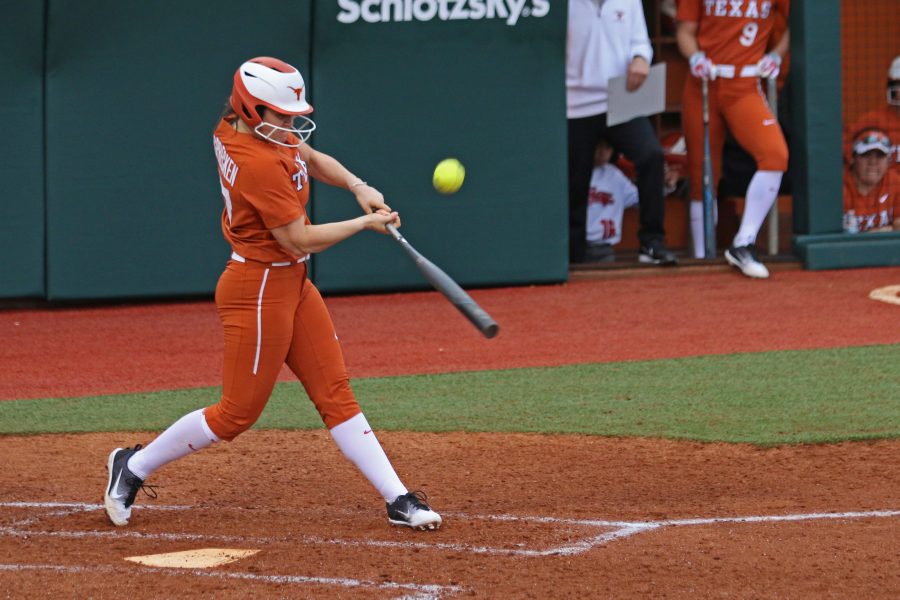 The 2018 Texas Longhorns stress that their early season success will not be measured by their wins and losses, but rather how they handle adversity and grow as the season presses on. This weekend, the Longhorns were forced to do a significant amount of both.

In their first trip away from Austin this season, Texas went 2–2 in the Puerto Vallarta College Challenge in Mexico, evening its regular season record to 4–4. The Longhorns started their weekend off with a 2-0 victory against Rutgers on Thursday night.

Senior pitcher Paige von Sprecken continued her excellence in the pitcher’s circle, throwing five strikeouts and sacrificing only three hits in a complete game shutout. The senior was also the first to spark the Texas offense, as von Sprecken stepped up to the plate in the bottom of the second inning and smacked a solo home run to give the Longhorns a 1-0 lead.

Following a scoreless third frame, freshman third baseman MK Tedder singled home sophomore catcher Taylor Ellsworth to give Texas the 2-0 lead and the win. The story, however, was much different for the Longhorns in game two of Thursday’s doubleheader, with Texas falling to No. 15 Ole Miss, 8-2. Struggling to find her control throughout her start, junior pitcher Erica Wright only managed to go two innings, giving up four earned runs and four walks.

The Texas bats, meanwhile, failed to come alive for much of the game against the Rebels, as the offense failed to push a runner across the plate until the fifth inning. The competition didn’t get much easier for the Longhorns on Friday when they squared off against No. 3 Oregon.

Oregon jumped on junior pitcher Brooke Bolinger in the second inning after DJ Sanders drilled a solo home run to make it 1-0. Shortly after, Bolinger loaded the bases, and the Ducks capitalized from there, driving in four more runs to make it a 5-0 lead.

Texas’ offensive woes from Thursday night carried into Friday. Oregon pitcher Miranda Elish stifled the Texas lineup throughout the game, allowing only three hits during her complete-game shutout. The Ducks increased their lead again in the bottom of the fourth when Mary Iakopo drilled a RBI double to make the score 8-0.

A scoreless top of the fifth from the Texas hitters ended the game early, as the Ducks run-ruled the Longhorns to the tune of a 8-0 final score. Entering Saturday with a 1–2 tournament record, the Longhorns were eager to make a statement in their final game against Houston.

The Longhorns faced adversity early when Houston seized the momentum during the second inning. Houston shortstop Mariah Garcia drilled a two-run home run off junior pitcher Erica Wright to give the Cougars a 2-0 lead. But Texas responded in the following inning when freshman Janae Jefferson roped a single to left field, driving in two runners after a throwing error by Houston. Shortly after, Jefferson crossed home plate thanks to a sacrifice groundout from junior designated player Kay Kay Hayter, giving the Longhorns a 3-2 lead.

Following a shaky second inning, Wright settled in for the Longhorns and pitched a complete game shutout behind five strikeouts and no walks. Texas backed up Wright with more run support in the fourth inning. Following two singles, sophomore shortstop Kaitlyn Slack and Jefferson singled home two runners to give the Longhorns a 5-2 lead.